In 2015, I researched and wrote about the risk to industrial society from geomagnetic storms—terrestrial phenomena that, despite their name, originate on the sun. Mild storms give us the ineffable beauty of the Northern Lights, and the Southern Lights too. Severe geomagnetic maelstroms might, some fear, knock out key satellites or cause continent-wide blackouts that would take months to undo.

I concluded that the risk had been exaggerated in the studies that gained the most attention. Still, given the potential stakes and the historical neglect of the problem, the issue deserved more attention from people in science, business, and government.

As I wrapped up my investigation, I tripped on a question of statistical method that I did not have time to fully explore. I have since put more time into the question. I just finalized a working paper about the results and submitted it to a journal. The upshot for the geomagnetic storm investigation is that I have modified my methods for extrapolating storm risks from the historical record. As a result, I have raised my best estimate of the chance of a really big storm, like the storied one of 1859, from 0.33% to 0.70% per decade. And I have expanded my 95% confidence interval for this estimate from 0.0–4.0% to 0.0–11.6% per decade. 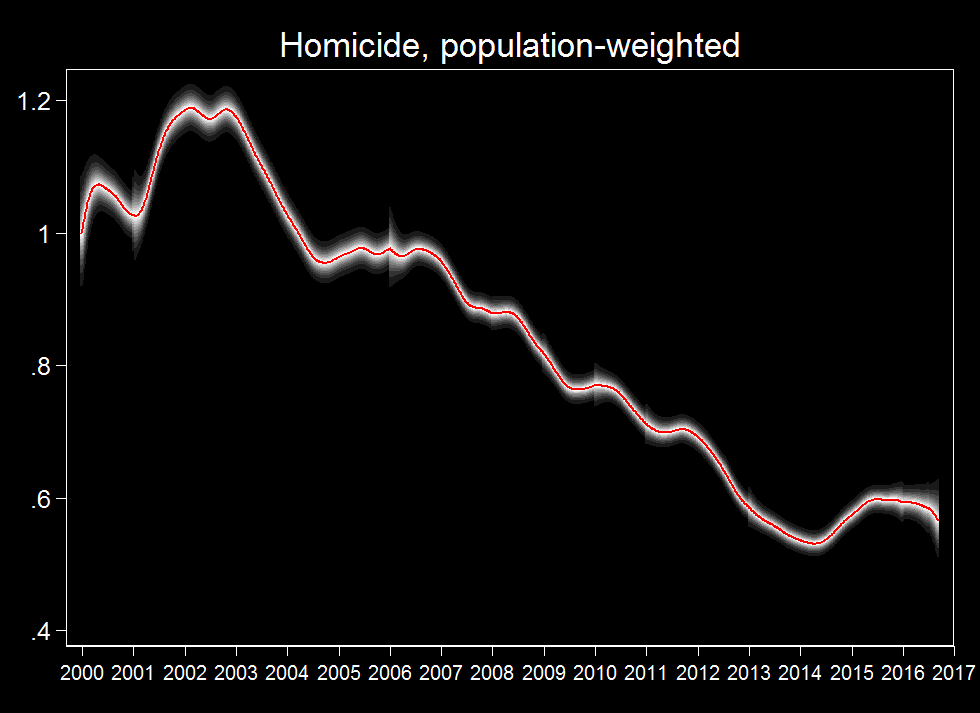 Writing in the Wall Street Journal last May, the Manhattan Institute’s Heather Mac Donald blackly heralded a “new nationwide crime wave.” She blamed the “Ferguson effect”: a pull-back by police in the face of public hostility over alleged abuses. Ferguson, of course, is the city in St. Louis county where in August 2014, a police officer shot and killed Michael Brown, leading to days of rioting.

Toward the end of last summer, two reporters at the New York Times chimed in on the existence of an uptick, at least in homicide: “Murder Rates Rising Sharply in Many U.S. Cities.”

These suggestions of an incipient crime wave caught Open Phil’s attention because we are entering the field of criminal justice reform. Might attempts to curb the “tough-on-crime” approach that has made the United States the world’s greatest prison state backfire in the form of higher crime? Or if not, might fear of such obstruct reform?

As the crime wave meme spread, it provoked counterreactions: Joseph Margulies on “The Dangerous Notion of a Nationwide Crime Wave”; Richard Rosenfeld of St. Louis University questioning whether even St. Louis felt the Ferguson effect; FiveThirtyEight’s Carl Bialik on how “Scare Headlines Exaggerated The U.S. Crime Wave”; a Brennan Center report and a New York Times editorial it inspired; and end-of-year updates by Radley Balko for the Washington Post and Thomas Abt for the Marshall Project.

Here, I present my attempt, with the help of GiveWell’s Jake Marcus, to sort out the controversy of whether America is experiencing a crime wave. Our results are all graphical. Our analysis is distinctive in starting from daily data rather than monthly or yearly totals, which I find a bit coarse when examining trends over just the last year or so.

But, as with the other articles and posts, our numbers are not definitive. We obtained high-frequency data—lists of individual crimes—for 19 major municipalities. The statistics pertain only to territories within city limits, not to broader metropolitan areas. Even if they did, the sampled cities may not be representative of all cities, let alone the entire United States.

Nevertheless, the results look reasonable and interesting. In our sample, the murder rate does rise starting around January 2014. But this fluctuation so far looks small compared to the big, overall slide since 2001, and is commensurate with past, temporary reversals. And it may have peaked a few months ago. (You heard it here first.) Meanwhile, totals for the broader category of violent crime, in which the rare offense of homicide hardly figures, rose only slightly, even as property crime kept dropping. These splits across crime types are the opposite of what I would expect from a Ferguson effect. Seemingly, more than with crimes of passion, theft and burglary begin with rational consideration of risk factors such as whether the police are around. But they kept falling.

Zeroing in on the conceptual boundary within violent crime between homicide and everything else, we find that the crime subtype most resembling murder—armed assault—also appears to have ticked upward, especially if we restrict to assault with a firearm. It may be then the recent crime wave is best seen as a gun crime wave. We are not certain, in part because data limitations force us to base that finding on just nine cities. And, in an even smaller sample, non-gun homicides have recently climbed faster than gun homicides.

As the FBI gathers comprehensive statistics this year, the reality of last year will become clearer. [node:read-more:link] This is the fourth post in a series about geomagnetic storms as a global catastrophic risk. A paper covering the material in this series was recently released. [node:read-more:link]