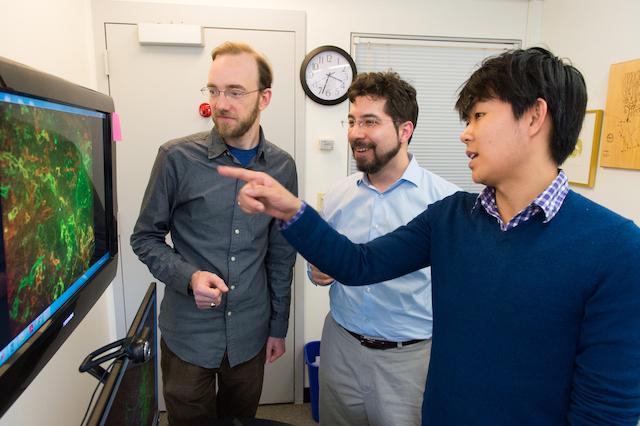 Representatives of the MIT Synthetic Neurobiology Group reviewed this page prior to publication.

The Massachusetts Institute of Technology’s Synthetic Neurobiology Group is led by Associate Professor Edward Boyden, and housed by both the MIT MediaLab’s new Center for Extreme Bionics and MIT’s McGovern Institute for Brain Research. Among other things, the group is working on developing new methods and techniques for mapping the brain.

Although we are still in the early stages of exploring science philanthropy, two areas we are interested in investigating further are fundamental basic science and improving tools and techniques within biomedical sciences. We see this gift as an opportunity to explore both of these spaces. We decided to investigate Professor Boyden’s lab specifically on the basis of a strong referral from our trusted scientific advisor, Dario Amodei.

We decided to make a gift to Professor Boyden’s lab to attempt to continue progress on his brain-mapping techniques, based mainly on our impressions that: if the project succeeds, it will have a major impact on neuroscience; success is a realistic, if highly uncertain, possibility; Professor Boyden is an outstanding scientist who has outstanding students in his group; Professor Boyden’s lab has combined economic and scientific considerations to analyze the comparative strengths and weaknesses of different approaches to mapping the brain in a way that we find both compelling and rare; and the proposal is an ambitious and unconventional project which appears to be unlikely to be funded through other sources. These impressions were formed with the assistance of Open Philanthropy Science Advisors Professor Chris Somerville and Dr. Dario Amodei (“Chris” and “Dario” throughout this page). We did not deeply investigate the possible upsides from substantial advances in neuroscience, but believe they could include reduced burden from neurodegenerative and mental disorders and other positive developments.

Based on these considerations, the Open Philanthropy Project recommended an unrestricted gift of $2,970,000 to support materials, equipment use, and salaries for as many as nine post-doctoral researchers, staff scientists, and new graduate students over two years for the Synthetic Neurobiology Group at the MIT Media Lab’s new Center for Extreme Bionics.

Our largest concern about this gift is that our initial decision to evaluate the Synthetic Neurobiology Group’s proposal relied strongly on Dario’s recommendation, rather than a systematic process (such as a request for proposals or a systematic evaluation of possible areas of basic science to fund). Despite a thorough evaluation of this particular project and conversations with several scientists in the field, we still have a somewhat limited sense of how this project compares with other projects in neuroscience, or how neuroscience compares with other fields of basic science we could support.

Professor Boyden leads MIT’s Synthetic Neurobiology Group. He is credited with playing a major role in the invention of optogenetics in 2005, a technique which uses light to control activity of neurons.1 We understand optogenetics to be widely acknowledged as among the most important new tools in neuroscience.2 Professor Boyden also co-invented expansion microscopy (ExM), a technique to artificially expand cells and tissue while preserving their structure, published in Science in 2015.3 ExM represents a potential way to overcome the resolution limits of light microscopes, as well as to allow cells and tissue to be more easily examined with affordable microscopes.4 Dario advised us that many people in the neuroscience community think that this discovery could be as important for neuroscience as optogenetics.

Our understanding is that the work of the Synthetic Neurobiology Group can be broken down into two main areas:

During our investigation (see “Process” below), we developed the impression that there is a prevailing belief among neuroscientists that producing a detailed model of the brain is essential to understanding how it works. The BRAIN Initiative and the Human Brain Project are two major projects (based in the U.S. and Europe respectively) aiming, among other things, to produce a full human connectome (that is, a comprehensive map of the neural connections in the human brain).5 Some of the things that might become possible if such a model is developed include comparing diseased brains with healthy brains, looking at the effect of drugs on brain structure, and seeing how brain structure changes with age.

Our understanding is that one barrier to large-scale brain mapping is the limited resolving power of light microscopes. Conventional light microscopes are limited to 200 nanometers,6 and electron microscopes to ~0.1 nanometers.7 Neural circuitry is dense and compact (for example, a synapse can be as small as 200nm in diameter),8 meaning its component factors are sometimes beyond a conventional light microscope’s resolving power. Neuroscientists are therefore limited to electron microscopes to obtain detailed structural and molecular maps of neural circuitry beyond the resolving limit of optical microscopes.9 However, using electron microscopes in this way is both slow and expensive, such that using them in brain-wide studies would present major difficulties.10 Further, although advances have been made that increase the resolution of light microscopes, such techniques are expensive and time consuming.11To give some context about the technology’s implications for the cost of brain-mapping, the more optimistic estimates we’ve heard are that an electron microscopy image of mouse connectome may be possible for around $200m with advances in imaging. Another estimate we’ve seen is $1 billion.12

The group’s view is that even if electron microscopy is able to scale to large volumes of entire brain circuits, it is less suitable for detailed studies of neural tissue than optical microscopy. According to the group, the typical treatment of specimens for the process of electron microscopy destroys important details about the neurons, their molecules, and interactions within and between cells that would be useful for understanding the fundamental nature of neural circuitry. Optical microscopy, on the other hand, 1) allows for multiple colors of light wavelengths that help to differentiate between individual neurons in clusters, as well as molecular interactions within cells, and 2) involves a more flexible treatment of the specimen, which could allow for molecular tagging and readout. They hope that successful development of a combination of techniques, such as expansion microscopy and genetic labeling, could help neuroscience meaningfully progress brain mapping in more affordable and efficient ways.13

The group believes that ExM is an important step towards making conventional light microscopy a more useful technique for brain-mapping. By expanding the specimen under study, ExM can show parts of cells and tissue that are beyond light microscopy’s resolving limit of ~200nm.14

Professor Boyden told us that his group is trying to raise at least $20 million over the next several years to pursue an ambitious research agenda within fundamental neuroscience – the connectomic mapping of small mammalian brain circuits at the highest resolution possible. Our understanding is that the group’s long-term objective is to develop techniques and technologies that create an inexpensive way to map a connectome with molecular annotations. Molecular annotation means including detailed epigenomic (the state of the cell that can impact which genes are expressed) and transcriptomic information (an inventory of the amounts of different types of mRNA in the cell) about individual neurons, clearly marking the synaptic connections between neurons, and potentially also including information about changes in proteins. More immediately, we understand that the group plans to attempt to produce a full map of a mammalian connectome (possibly starting with the Etruscan shrew, or at least a portion of mouse) and potentially also improve our ability to map neural activity and take molecular measurements of neural states (3D-mapping and measuring of live brains in real time).15

As noted above, mapping a mouse connectome (without molecular annotation) using existing techniques would cost something like $1 billion. If the Synthetic Neurobiology Group’s research is successful, scientists may be able to map a mouse connectome for tens of millions of dollars, potentially less as techniques improve. Chris and Dario think that such a decrease in cost would probably result in more connectomes being mapped sooner, both within and across species.

The Open Philanthropy Project is providing support for some of the initial stages of the Synthetic Neurobiology Group’s goal of mapping a mammalian connectome. These stages focus on proving that the technology the group proposes to develop and use is feasible. It is possible that funds from the gift will also be applied to support collaborating scientists working on these issues at other universities or non-profit institutions, something that we understand can be more procedurally challenging to do flexibly using funds from grant-making government agencies.

The initial research supported by our funds has four goals:

We expect to have a reasonably good sense of whether the Synthetic Neurobiology Group has achieved or is closer to achieving these outcomes two years from now, based on its published and submitted papers and our conversations with the group.

Rationale for the gift

We are in the relatively early stages of thinking about science philanthropy, and we have not set focus areas within this category (see our September 2015 update about our plans going forward). However, this gift falls within two areas we are interested in investigating further: high-risk/high-reward basic science research and research into improving existing scientific tools and techniques.

Case for this gift

We see the case for this gift as being a test of whether there is a realistic possibility of making a major advance in neuroscience that will radically reduce the cost of producing maps of connectomes. Based on the potential impacts discussed below, we think such an advance could be extremely important from a humanitarian perspective, and that the small probability of making a very large impact in this field justifies our investment.

A secondary motivation of investigating and making this gift has been as part of our learning about science philanthropy and directly funding research. We’ve written previously about how we think about learning about a new cause area via giving.

Our conversations with Professor Boyden and other neuroscientists led us to think that it would be a major advance in neuroscience if this gift were successful. We believe that advancing neuroscience is a worthwhile goal from a humanitarian perspective both because of potential near-term, foreseeable applications and because of the less foreseeable developments it may provoke. Two immediate potential applications of a major advance in mapping a connectome are: