Open Philanthropy recommended a total of approximately $985,926 to enable individuals in the early stages of their careers to pursue work and study related to global catastrophic biological risks.[1]This is an estimate because of uncertainty around tuition costs and currency exchange rates in future years. This number may be updated as costs are finalized. We sought the majority of applications for this funding here.

Open Philanthropy recommended a grant of $100,000 to the Berkeley Existential Risk Initiative to provide support for Kevin Esvelt’s Sculpting Evolution group at the MIT Media Lab.

Open Philanthropy recommended a grant of $200,000 to the Effective Altruism Foundation (EAF) to support research and advocacy on potential policy interventions in Europe. EAF plans to use these funds to research interventions in the field of biosecurity.

Open Philanthropy recommended a grant of $2,000,000 to 1Day Sooner for general support. 1Day Sooner’s mission is to advocate on behalf of volunteers for human challenge trials (HCTs). They hope to accelerate the development of vaccines for several neglected diseases by organizing volunteers to take part in HCTs, and by advocating for the use of regulatory and financial tools like advance market commitments.

HCTs, which involve exposing volunteers to a controlled dose of a pathogen, require fewer participants and can be completed on a significantly shorter timeline than standard clinical trials. They have historically been used for smallpox, influenza, malaria, and other potentially fatal diseases.

This follows our November 2020 support and falls within our focus area of biosecurity and pandemic preparedness.

Open Philanthropy recommended an investment of $10,000,000 over two years in Good Forever, for regranting and/or reinvesting in promising biosecurity projects.

Open Philanthropy is seeking proposals from those interested in contributing to a research project informing and estimating biosecurity-relevant numbers and ‘base rates’. We welcome proposals from both research organizations and individuals (at any career stage, including undergraduate and postgraduate students). The work can be structured via contract or grant.

The application deadline is June 5th.

How likely is a biological catastrophe? Do the biggest risks come from states or terrorists? Accidents or intentional attacks?

These parameters are directly decision-relevant for Open Philanthropy’s biosecurity and pandemic preparedness strategy. They determine the degree to which we prioritize biosecurity compared to other causes, and inform how we prioritize different biosecurity interventions (e.g. do we focus on lab safety to reduce accidents, or push for better DNA synthesis screening to impede terrorists?).

One way of estimating biological risk that we do not recommend is ‘threat assessment’—investigating various ways that one could cause a biological catastrophe. This approach may be valuable in certain situations, but the information hazards involved make it inherently risky. In our view, the harms outweigh the benefits in most cases.

A second, less risky approach is to abstract away most biological details and instead consider general ‘base rates’. The aim is to estimate the likelihood of a biological attack or accident using historical data and base rates of analogous scenarios, and of risk factors such as warfare or terrorism. A few examples include:

This information allows us to better estimate the probability of biological catastrophe in a variety of scenarios, with some hypothetical concrete examples described in the next section.

The biosecurity team at Open Philanthropy (primarily Damon) is currently working on developing such models. However, given the broad scope of the work, we would be keen to see additional research on this question. While we are interested in independent models that attempt to estimate the overall risk of a global biological catastrophe (GCBR), we are particularly keen on projects that simply collect huge amounts of relevant historical data, or thoroughly explore one or more sub-questions.

One aspect of this approach we find particularly exciting is that it is threat-agnostic and thus relevant across a wide range of scenarios, foreseen and unforeseen. It also helps us to think about the misuse of other dangerous transformative technologies, such as atomically precise manufacturing or AI.

We are therefore calling for applications from anyone who would be interested in spending up to the next four months (or possibly longer) helping us better understand these aspects of biorisk. We could imagine successful proposals from many different backgrounds—for example, a history undergraduate looking for a summer research project, a postdoc or superforecaster looking for part-time work, or a quantitative research organization with an entire full-time team.

What is our goal?

We are interested in supporting work that will help us better quantitatively estimate the risk of a GCBR without creating information hazards. To do this, we can imagine treating the biological details of a threat as a ‘black box’ and instead quantifying risk within hypothetical scenarios like the following:

Scenario 1 (states or big terrorist groups): In January 2025, scientists publish a paper that inadvertently provides the outlines for a biological agent that, if created and released, would kill hundreds of millions of people. Creating the pathogen would require a team of 10 PhD-level biologists working full time for 2 years, and a budget of $10 million.

Scenario 2 (small terrorist groups or lone wolf): Same as Scenario 1, but creating the pathogen requires a single PhD-level biologist working full time for 2 years, and a budget of $1 million.

For each of these scenarios, what is the ‘annual rate’ at which the biological agent is created and released (either accidentally or intentionally)?

We are interested in research proposals that aim to estimate this rate or estimate rates in similar scenarios. Proposals don’t need to do this directly, but could instead aim to quantitatively understand ‘upstream’ aspects of the world that could affect the risk of catastrophe.

The scenarios serve as a concrete litmus test for the kinds of proposals we are interested in—if the proposal wouldn’t directly help a researcher estimate the annual risk rate in these toy scenarios, it is unlikely to be of interest to us. In particular, purely qualitative approaches, such as trying to understand specific case studies in detail, or trying to understand the ideological drivers of terrorism, are unlikely to be a good fit. Similarly, very theoretical approaches, such as those with empirical unverifiable parameters or unfalsifiable elements, are also unlikely to be successful.

An ideal proposal could propose things like one or more of the following:

We are interested in proposals of any length or scope, ranging from a full time 4-6+ month commitment to a small 10-hour project. In some instances, we might respond to a proposal by suggesting a closer ongoing collaboration.

How do I apply?

Applications are via this Google form, and are due on Sunday, June 5th, at 11:59 pm PDT. You’ll be required to submit:

We expect to fund between $500,000 and $2 million worth of proposals, depending on the quality and scope of proposals. In exceptional circumstances, we could expand this amount substantially.

You should hear back from us by June 26th. Please contact us at [email protected] if you have any further queries.

If you would like to provide anonymous or non-anonymous feedback to Open Philanthropy’s Biosecurity & Pandemic Preparedness team relevant to this project, please use this form.

Thank you to Carl Shulman for initially suggesting this research approach and providing comments. We appreciate additional comments/advice from many others, particularly Chris Bakerlee, Rocco Casagrande, and Gregory Lewis.

Open Philanthropy recommended a grant of $200,000 to the Good Forever Foundation to support projects related to pandemic preparedness and COVID-19 mitigation. 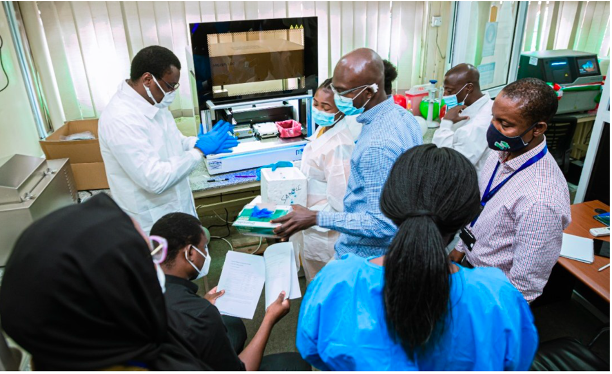 Open Philanthropy recommended a grant of $2,921,000 to the Nigerian Institute of Medical Research to support a safety and immunogenicity trial in adults in Nigeria of fractional doses of the AstraZeneca, Pfizer, and Johnson & Johnson COVID-19 vaccines. The trial has the potential to indicate that smaller doses of these vaccines promote immune responses that are “non-inferior” to those from standard doses. If non-inferiority can be established, this could allow many people to be vaccinated against COVID-19 sooner despite limited supplies, and potentially affect booster recommendations in Nigeria or elsewhere, reducing deaths and other harms from the pandemic.

This falls within our work on scientific research, and specifically within our interest in science supporting biosecurity and pandemic preparedness.

Open Philanthropy recommended a grant of $300,000 over two years to the International Genetically Engineered Machine (iGEM) Foundation to support a project, led by Piers Millett, on verification of the Biological Weapons Convention (BWC). The BWC, enacted in 1972, bans the development and use of biological weapons, which we believe have the potential to cause significant harm. Verification of compliance with the BWC has been chronically neglected.

This follows our April 2020 support and falls within our focus area of biosecurity and pandemic preparedness.

Open Philanthropy recommended a total of approximately $280,805 to support individuals in pursuing work and study related to biosecurity. Recipients include:

This falls under our focus area of biosecurity and pandemic preparedness.