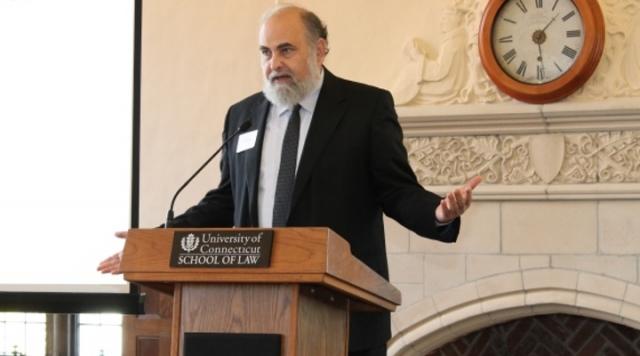 Professor Mark Kleiman gives a presentation at the University of Connecticut School of Law. (Photo courtesy of Mark Kleiman)

This page gives an update on the grant to the Washington Office on Latin America, which supported UCLA Professor Mark Kleiman and associated researchers at the BOTEC Analysis corporation. The lead researcher, Mark Kleiman (who is now a professor at NYU), had planned a study on the mechanisms by which swift-and-certain sanctions are effective, but reallocated funding due to a belief that the study was blocked by political headwinds. The study can now move forward, and we are providing funding for it.

The Open Philanthropy Project recommended this grant as part of its ongoing investigation into criminal justice reform.

At the start of the grant, Prof. Kleiman provided a prioritized list of potential projects,1 though we provided unrestricted funding and encouraged Prof. Kleiman to adjust his plans as he saw fit. Of the 8 projects on the original list, two have been completed and two are in progress; the others have been de-prioritized in favor of a set of projects that were not originally planned.

The following table summarizes the status of each project that was either originally planned or eventually carried out under the grant. We exclude projects that were on the original list, but prioritized low enough that they were not expected to happen without additional funding beyond the grant.

We feel that we have limited insight into the counterfactual impact our funding had. Our understanding is that the official budgets for activities under the grant added up to more than the grant, with the additional needed funds effectively coming from Prof. Kleiman personally via un-billed hours (effectively donated time) and/or reduced margins for BOTEC, his corporation. We don’t know how many of the above activities would have happened in the absence of our support, though we believe that at least some would not have.

We do not have the capacity to thoroughly assess the pieces and their relevance. From our informal review, the pieces that most stood out to us were the Washington Monthly pieces (which argue, to a lay audience, that there are multiple regulatory frameworks for marijuana that may be preferable to the “commercial” approach legalization advocates have tended to pursue) and the “Is All Medical Marijuana the Same?” paper (which argues, compellingly in our view, that previous approaches to assessing the impact of medical marijuana policy are flawed).

The original list of projects consisted mostly of proposals to collect and analyze new data, pilot new programs, and/or produce detailed policy analysis (for example, determining the “optimal level and basis of cannabis taxation”). By contrast, the list of completed projects consists mostly of pieces that focus on persuasion (often with literature review as a major component) and propose fairly high-level principles for policymaking. This difference is material to us. We are fairly convinced of Dr. Kleiman’s ability to ask important questions, while we have little information about his ability to be persuasive. We have little sense for the value of many of the pieces that were completed, and we would have hesitated to fund them if we’d been asked in advance.

When we fund academics in the future, we still intend to give them broad discretion over how the money is spent, but will ask them to talk to us first if they plan to devote funding to projects not in the original grant submission.

Due to the communication challenges discussed above, as well as the fact that we don’t currently feel we understand BOTEC’s finances well enough to have a good sense for the impact of additional funding, we would want to be fairly closely involved with any further support for this sort of work. We don’t currently have the capacity to closely evaluate and engage with work of this type, though this may change if and when we hire a full-time employee to work on criminal justice reform. Therefore, we are not renewing a similar-sized grant. However, we are providing $80,000 to complete the “swift and certain mechanisms study.” We originally agreed to fund this study; at one point Prof. Kleiman reallocated the funding to other projects when it appeared that this study could not proceed for political reasons, but now it will be possible to move forward with this study, and we are providing the additional funds needed to do so.