This page was reviewed but not written by the grant investigator. Future of Research staff also reviewed this page prior to publication.

The Open Philanthropy Project recommended a grant of $150,000 to Future of Research (FoR) for general support. We previously recommended a two-year, $300,000 grant to FoR in 2016 to support its mission to “improve the scientific research enterprise.”

@FoR Proposal, [email protected] Since that time, we have devoted less attention to directly funding science policy and infrastructure work than anticipated, and do not feel that we are in a position to properly evaluate FoR’s work. This award therefore represents an “exit grant” to FoR while it looks for other sources of funding.

This grant falls within our work on scientific research. 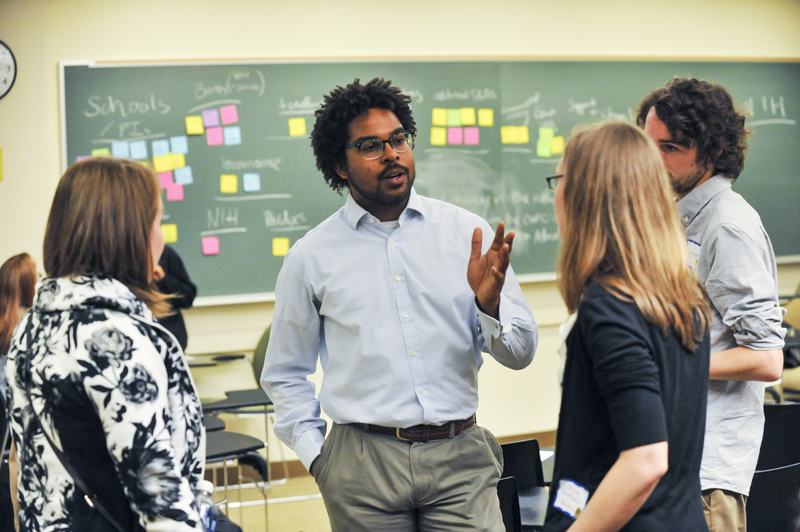 Future of Research staff reviewed this page prior to publication.

The Open Philanthropy Project is currently in the early stages of exploring science philanthropy. Improving science policy and infrastructure seems to us to be one potentially promising area for investigation and grantmaking.

Future of Research (FoR) is a new non-profit with a stated mission “to improve the scientific research enterprise.”1 We see a grant to Future of Research as a potentially promising opportunity within science policy and infrastructure, which is a space where we have found few active organizations, particularly organizations planning to do full-time work on the issues most compelling to us.

FoR is a new organization. We have little to go on regarding past accomplishments, and there are no particular future activities we’re confident in. Given that we will be able to review FoR’s performance over the next 2 years, we feel that this risk is worth taking.

Based on these considerations, the Open Philanthropy Project recommended a $300,000 grant over two years to Future of Research.

We are currently still in the relatively early stages of thinking about science philanthropy, and we have not yet set focus areas within this category (see our September 2015 update for more detail about our plans going forward). This grant falls within the area of science policy and infrastructure reform, which we are particularly interested in. We think is likely enough to become a focus area that we are happy to invest time in relevant opportunities.

Future of Research (FoR) was founded as a volunteer association of early-career life science researchers in October 2014. FoR is currently run on a volunteer basis by a group of Boston-area postdocs led by Gary McDowell. Their stated mission is “to improve the scientific research enterprise.”2

Its activities to date have consisted mainly of organizing conferences in Boston, San Francisco, Chicago, and New York. We attended one of their workshops in San Francisco on the recommendation of one of our scientific advisors. It was well-attended and covered a number of issues that we feel are important (such as some of the issues discussed under “proposed activities”).

FoR has also published a paper in F1000Research describing the results of its first conference in Boston.3 We feel the paper discusses important issues (again, such as some of the issues discussed under “proposed activities”).

We feel that FoR’s performance so far has been strong for a volunteer-led organization. So far, this judgment is based primarily on the workshops and paper discussed above, as well as positive comments about their work that we have heard from senior scientists.

We think it is possible that FoR could play an important role among groups working on scientific policy, and we consider a grant that provides FoR with an opportunity to demonstrate the potential value of its work in this area to be a worthwhile bet. We view this grant as an opportunity to enable a group to work full-time on issues which currently receive almost no full-time attention outside of people working in government.

FoR has identified several issues in current scientific practice that seem like potentially important problems to us, including:

To address these issues, FoR has proposed some policy changes that seem plausibly beneficial to us, including:

FoR has also proposed some ideas which seem less likely to us to be beneficial, including:

FoR is seeking $465,000 to $750,000 in funding for its first three years, primarily to cover the Executive Director’s salary, travel costs, and basic operational expenses. FoR may hire additional staff after its first year to assist with research and coordinating workshops. Our impression is that FoR plans to seek funding for individual workshops from additional sources.

FoR also plans to seek funding from other sources, including applying for project grants to carry out specific studies and activities.

We expect that having a significant effect on the problems in science policy and infrastructure generally, including the problems FoR plans to address, will be intrinsically difficult due to the many large, entrenched institutions involved. We also have two more particular concerns about this grant:

However, as described above, we think supporting FoR is a bet worth taking, given the lack of attention this area is currently receiving.

Potential positive outcomes of this grant might include FoR:

We also believe it is possible that the organization and its activities may improve in other ways as FoR staff develop a deeper understanding of the field through devoting full-time attention to these issues.

We expect to have a conversation with FoR staff every 3-6 months for the next two years, with public notes if the conversation warrants it. At the one-year mark, we expect to provide an update on this grant, either by publishing public notes or by producing a brief write-up. Towards the end of the grant, we plan to attempt a more holistic and detailed evaluation of the grant’s performance.

However, we may abandon some or all of these follow-up expectations if scientific policy and infrastructure ceases to be an area of interest for us, or perform more follow-up than planned if this work becomes a key part of our priorities.

We heard of FoR when two of our scientific advisors recommended that we attend a workshop they put on at UCSF. Since this workshop was covering science policy issues of interest to us and we were looking for grantees in this area, we attended the workshop and met Gary McDowell. At the workshop, Gary told us that FoR was planning to create a non-profit organization and was looking for funding. We asked FoR to submit a proposal to us. Feedback from another source on FoR’s work was also an input to our decision.