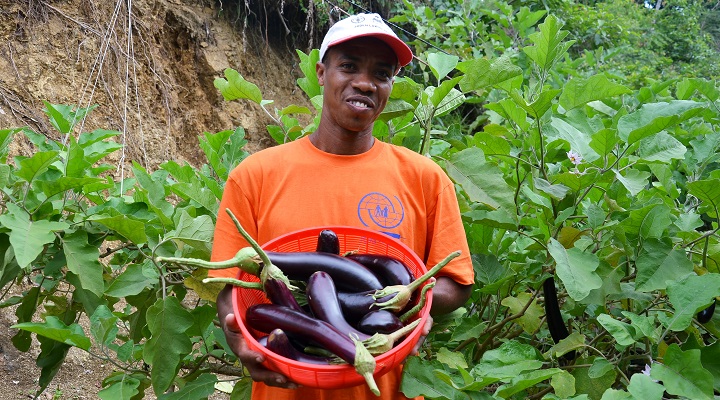 International Organization for Migration (IOM) staff reviewed this page prior to publication.

A proposal submitted by the International Organization for Migration (IOM) and the U.S Association for International Migration (USAIM) describes the proposed grant, which would involve a pilot program to give Haitians access to seasonal work visas in the U.S. The total amount requested is $1,490,504 over 14 months.

Temporary seasonal workers in the U.S. earn far more money than unskilled workers in Haiti, so giving Haitians access to U.S. labor markets could substantially increase their income. After being removed from eligibility for H-2 (lower-skill, seasonal work) visas in 2009 due to widespread abuse, Haiti was reinstated in 2012. However, few legitimate U.S. employers have recruited Haitians to use H-2 visas since then. The project aims to to recruit employers for a pilot with 100 Haitian workers, to facilitate the workers’ access to H-2 visas, and to ensure compliance with H-2 visa terms so the visa access will be sustainable. The project also includes the first rigorous evaluation of a U.S. labor facilitation program. Our understanding is that employers for the 100 Haitian workers are likely to be found and they are likely to be able to receive H-2 visas, but we have less confidence that the program will be sustainable beyond the pilot stage or that compliance with visa terms will be high enough to ensure Haiti’s continued access.1 We see the possibility that the program results in many Haitians being able to take advantage of H-2 visas in the coming years, in addition to the benefits of the evaluation and our learning benefits, as sufficient to justify the grant.

Based on these considerations, Good Ventures decided to grant a first tranche of $450,655, and to conditionally commit a second tranche of $1,039,849 (depending on employers being identified for the pilot group of 100 Haitian workers and evidence that they will be able to obtain H-2 visas).

The following summary is based on documents that the IOM shared with us in the process of proposing this grant, including:

Due to widespread abuse, Haiti was removed from the list of countries eligible for H-2 visas, which are the main mechanisms allowing lower-skill temporary workers legal access to the U.S. labor market, in 2009.4 In 2012, partly as a result of advocacy by the Center for Global Development, the U.S. government once again included Haiti in the list of eligible countries.5 However, very few H-2 visas have since been issued to Haiti—just 59 in 2012 and 14 in 2013.6 Legitimate employers have expressed very low demand for H-2 workers from Haiti, and there have been concerns about illegitimate use of the visa, which would increase the exploitation risk for migrants and the administrative burden on US consular staff and immigration officers.7 The goal of the proposed work is to pilot a program that familiarizes US employers with Haitian workers and ensures sustainable and legitimate uptake of the visa.

The project aims to recruit U.S. employers for an initial group of 100 Haitians to use H-2 visas for seasonal work in the U.S. and ensure that they comply with their visa requirements so that other Haitians can continue to use H-2 visas in the future. The project also includes an evaluation of the impact of participation on the Haitian workers and their families, and a number of other elements.10 Work is divided into three phases:11

Funding is expected to flow in two tranches:12

To ensure that H-2 visa holders comply with the terms of their visas, the project will feature a number of efforts, including:13

By demonstrating high rates of compliance with visa requirements, the project aims to ensure sustainable Haitian access to H-2 visas.

Rationale for making the grant

We have identified labor mobility as a priority cause, and as such have prioritized it for possible “learning grants”. As part of our search for potential grant opportunities, we spoke with Michael Clemens at the Center for Global Development, the most prominent advocate for this cause that we know of. Dr. Clemens suggested that we support this project, and put us in touch with IOM representatives.

The gains to a Haitian worker from receiving an H-2 visa appear to be quite large: unskilled agricultural workers in Haiti make around $1,000 a year, while H-2A visa holders in the U.S. make around $20,000 per year.14 However, Haitians who come for the project are unlikely to stay for a full year, and they seem likely to bear some additional costs in the U.S. Net of costs, we might expect a Haitian worker who is able to come to the U.S. on an H-2 visa to make about $10,000 more than they would in Haiti.15 Accordingly, if the project succeeds in its initial goal of getting 100 Haitians H-2 visas and jobs, the additional income to Haitians in the first year would be about $1 million.

The project also seems to have considerable upside. If overstaying and abuse of H-2 visas are limited and Haiti continues to have access to H-2 visas, many more Haitians may be able to take advantage of the H-2 program in the future. Haiti sent roughly 500 people to the U.S. on H-2 visas in 2008 and 2009 (before it was removed from program eligibility), suggesting that that may be a realistic level to expect if legitimate employers begin using the program.16 500 is also roughly the mean annual number of H-2 users from countries in the Americas in 2012 that had at least one user (excluding Mexico, which is a substantial outlier).17 If 500 Haitians per year were able to use H-2 visas, their total income gains over a 10 year period would be around $50 million. While we think it is relatively unlikely that the project will result in such long-run gains, the benefits if it does appear substantial.

That said, it is not at all clear how to weigh the wages earned by Haitian H-2 visa holders. It seems fairly likely that at the margin Haitian H-2 visa holders are displacing irregular immigrants or H-2 visa holders from other countries, either of which would likely considerably undercut the social benefits of increasing access to the H-2 program and make “wages earned by Haitian H-2 workers above what they would have earned in Haiti” a poor proxy for “net transfers to low-income people.” Although it is difficult to understand the appropriate counterfactual (i.e. what would happen in the absence of Haitian workers using H-2 visas), Haiti is the poorest country in the Western hemisphere, with a GDP per capita in purchasing power parity terms 1/10th of Mexico’s and more than half of the population below the $1/day poverty line in 2001.18 This suggests that to the extent that Haitians are replacing other workers, the result is a progressive transfer (i.e. the wage gains from H-2 access are transferred to a population that was poorer than the counterfactual recipients were prior to receiving them). Additionally, Haitian H-2 visa holders might be expected to remit a larger portion of their earnings to poor compatriots.19 Our current best guess is that Haitian H-2 workers would mostly displace irregular immigrants or H-2 visa holders from other countries, but that ensuring continued Haitian use of the H-2 visa could eventually lead to a (very small) net increase in the population working in the U.S.

While we see the wages paid to H-2 workers (and potentially remitted) as the main benefit of this project, there may be others. CGD is planning to conduct an evaluation, which we believe would be the first rigorous evaluation of a U.S. labor facilitation program, and one of only a handful of such evaluations globally. The evaluation could plausibly influence other policymakers in the future, and accordingly may account for a substantial portion of the expected value of the project.20 Unlike the benefits from a stream of income and remittances, the benefits of the evaluation do not strictly depend on Haitians’ continuing to be allowed access to the H-2 program after the pilot.

The first tranche of funding will cover the initial efforts to get the program started and to identify one or more employers to hire the 100 pilot program workers. Conditioning the second tranche of funding on the the identification of employers planning to take 100 Haitian workers and evidence that they will be able to obtain H-2 visas limits some of the downside risk, though notably not the risk that the program is unsustainable after the pilot ends.

Because it is a fairly short-term pilot, this project also offers opportunities for learning: we expect to know whether visas will be granted and employers are found within about 6 months, and the sustainability of the program and the results of the evaluation within a year from that.

We believe that this project is unlikely to receive funding from another source—or take place without outside funding—if we do not support it. IOM and CGD staff have approached multiple bilateral and multilateral funders since Haiti was added to the list of countries eligible for access to H-2 visas in 2012, and have not found interest in supporting a migration facilitation project.21 We believe this project was only fully fleshed out and formalized because we expressed an interest in potentially supporting it.

We see several potential risks to the success of the grant:

We see a fairly high probability of being able to find out which of these risks end up occurring, which is unusual relative to many of our other grants.

We see the main rationale for this grant as the possibility that it will eventually lead to many Haitians using H-2 visas for temporary work in the U.S. We see this scenario as relatively unlikely, but we believe that the possibility, in addition to the benefits of the evaluation and our learning benefits, justify the cost. We also see this as a useful test for a broader potential “migration facilitation” focus area within labor mobility and as a further opportunity to express our interest in the cause.

Questions we hope to eventually answer include:

We expect to have phone calls with IOM and/or other program staff roughly every 3 months for the duration of the grant, with public notes if the conversation warrants it. We will disburse the second tranche of funding and post an update after employers are identified and we receive evidence that the workers will be able to receive H-2 visas, or, if those conditions are not met, we will publicly discuss what happened.

Towards the end of the duration of the grant (i.e. after the pilot workers have returned), we plan to attempt a more holistic evaluation of the project’s performance, aiming to answer questions #2 and #3 above. We may continue to check in on the status of Haitian H-2 visa usage (which the U.S. State Department publicly discloses) and the evaluation on a roughly annual basis for an indefinite period.

We may abandon either or both of these follow-up expectations if labor mobility ceases to be a focus area.

We approached Michael Clemens of CGD looking for funding opportunities in labor mobility in November 2013. He suggested we speak with IOM Haiti staff about a migration facilitation mechanism and we began to do so starting in December 2013. After a few more conversations with IOM staff and feedback on an earlier draft, a final proposal was submitted in June 2014.

We shared a draft version of this page with IOM and CGD staff, and incorporated some of their suggestions, prior to the grant being finalized.

In December 2014, we published our first update on the progress of this grant to date and decided to grant the second tranche of funds.

In March 2015, we received the following documents from IOM:

At IOM’s request, we redacted the names of specific farmers and consultants in the interim report and are not posting Annex 1, which contains the agenda and participant list for the November 2014 stakeholder meeting.