Note: This post originally appeared in the monthly farm animal welfare newsletter written by Lewis Bollard, our program officer for farm animal welfare. Sign up here to receive an email each month with Lewis’ research and insights into a farm animal advocacy research topic. We decided to cross-post this one because we thought it was especially interesting and wanted to make people aware of Lewis’ newsletter, but note that the newsletter is not thoroughly vetted by other staff and does not necessarily represent consensus views of the Open Philanthropy Project as a whole.

When we think of farm animals, we likely don’t think of carp. But this family of freshwater fish — which includes the three most populous farmed fish species in the world: crucian carp, silver carp, and catla — is likely the most numerous farmed vertebrate animal in the world, with an estimated 25-95 billion farmed every year. (About 62 billion chickens are farmed every year, but each is farmed for just 5-8 weeks, whereas carp are farmed for 12-14 months, meaning far more carp are alive at any given time.)

Fish are the forgotten farm animal. Of the more than 100 undercover investigations that U.S. animal advocates have done to expose abuse of farm animals, just one focused on fish. For a long time scientists questioned if fish could feel pain, though our internal investigation suggests there’s about as much evidence for some fish being able to feel pain as there is for birds.

When we do think of fish, it’s likely of wild ones. But the wild fishing industry hasn’t grown since 1988, largely due to the depletion of wild fisheries. By contrast, fish farming has grown sevenfold over the same time period, and now accounts for the majority of fish consumed by humans globally, including in the U.S. (More wild fish are still slaughtered for non-human consumption: about a third of captured wild fish are fed to farm animals, including farmed fish.) 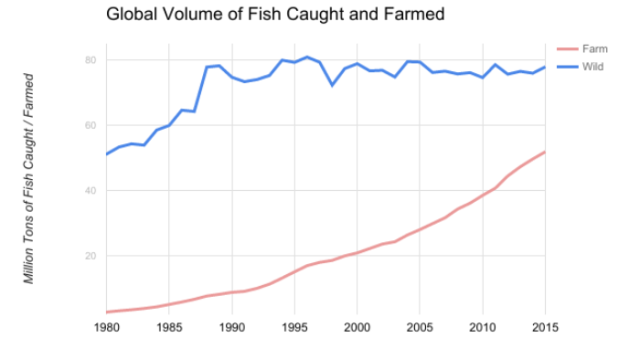 Fish farming has boomed in the last 35 years, while wild fishing volume has stagnated. Note that these data include all marine, freshwater, and diadromous fish, but exclude crustaceans, amphibians, and other aquatic animals. Source: FAO - Fisheries and Aquaculture Information and Statistics Branch (link).

So what can we do to help farmed fish? First, we need better research and data on a few topics: 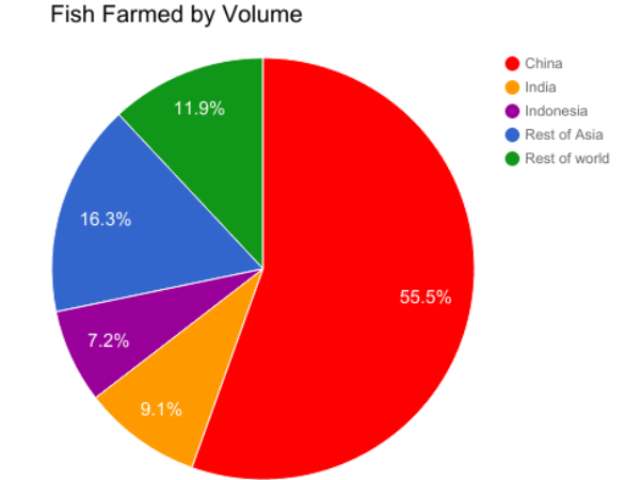 China is by far the world’s largest fish farming nation. India, Indonesia, and a few other Asian nations (especially Bangladesh and Vietnam) account for much of the remaining production. Source: FAO - Fisheries and Aquaculture Information and Statistics Branch (link).

Second, we need to focus on the regions, systems, and practices where the most fish are at stake: 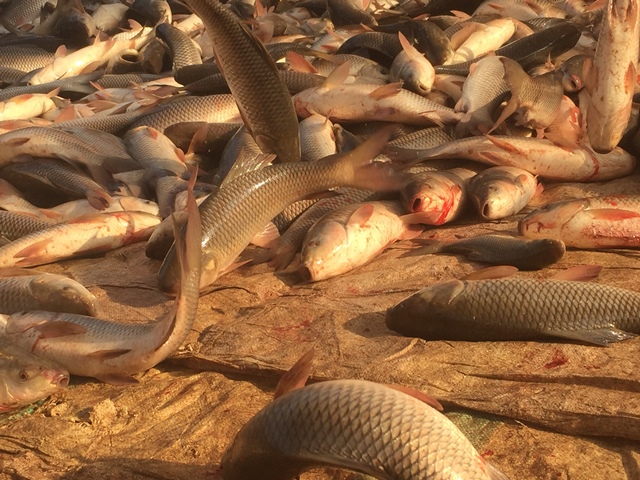 Farmed carp attempt to flap their way back to water as they suffocate during “harvesting” at a large commercial fish farm in Andhra Pradesh, India. Source: personal photo.

Third, we should consider how we can leverage existing schemes, trends, and policies to help fish:

Sign up here to receive an email each month with Lewis’ research and insights.

I wanted to note that I do not receive Lewis’s updates, even though I’m subscribed to the newsletter.

Thanks Siebe! I can confirm

Thanks Siebe! I can confirm you’re signed up for the newsletter. My last newsletter was in December, and next one will be before month’s end. Please check your spam folder / marketing folder in Gmail. If that doesn’t work, just send me a direct message on Twitter and I’ll sort it out.

Excellent piece, Lewis - really underscores the need to take aquaculture (and, indeed, wild-fishing) more seriously as a source of suffering. (I also found this Smithsonian Mag piece useful in putting the latest science and numbers into context: https://www.smithsonianmag.com/science-nature/fish-feel-pain-180967764/)

In India, numbers of farmed fish consumed have recently overtaken wild-caught - a milestone that surprises many, myself included. Additionally, large nutrition gaps and high stunting numbers have resulted in the Indian Council of Medical Research making a recommendation that more Indians eat (more) fish - a worrying development, to say the least. The government at large is following suit, and earmarking subsidies for aquaculture, and for investment in cold chain infrastructure, which would allow fish and other meat to be transported across the country without spoilage.

As Managing Director for the Good Food Institute in India, my aim is to support entrepreneurs and companies in bringing through alternatives to fish and other farmed animal products. Doing this sooner rather than later, before investment in aquaculture, abattoirs, and cold-chain infrastructure truly takes root, is of paramount importance. If you’re able to help conduct research or direct work in this area, I’d love to chat.