What Do We Know about AI Timelines? (October 2015 version)

What are we trying to forecast?

From a risk-benefit perspective, we’re mostly interested in what machines can do, not how they do it. Moreover, for long-term forecasting it’s probably easier to forecast technological capabilities rather than technological solutions, since economic and other incentives are stronger for the former than for the latter. For example, it’s probably easier to predict that within 20 years we’ll be able to do X amount of computation for $Y than it is to predict which particular computing architecture we’ll be using to do X amount of computation for $Y in 20 years.

One key AI capabilities milestone we’d like to predict is something like Müller & Bostrom (2014)’s notion of “high-level machine intelligence” (HLMI), which they define as an AI system “that can carry out most human professions at least as well as a typical human.”1 To operationalize this a bit further, we might say that an HLMI is a machine that can,

One could change these and other parameters to arrive at definitions of HLMI that have different implications. If you were primarily interested in AI’s effects on the job market, you might instead want to forecast when we’ll have machines that can replace median-skilled workers in 70% of occupations with 12 months of training at human cost. Or if you were primarily interested in loss of control scenarios, you might instead choose a particular subset of human occupations (AI research, computer security, negotiation, intelligence analysis, etc.) and try to forecast when a machine will be able to achieve the performance of the 90th-percentile-skilled worker (among those doing each of those jobs) with one month of training, at any cost.

Unfortunately, extant HLMI forecasts rarely define so precisely what level of technological capability they’re trying to forecast, so if we take the outputs of expert surveys and other forecast summaries as some evidence for true HLMI timelines, it’s not clear how we should integrate those forecasts, in part because they might have been trying to forecast radically different things.

Also, we should remember that, no matter what threshold we set for occupations at which the machine has achieved roughly human-level performance, it will probably demonstrate vastly superhuman performance at many or most other occupations by the time it achieves human-level performance at the last one specified by our operationalization.2 Such an operationalization might suggest that, subjectively, AI capabilities will “woosh” past most HLMI milestones defined in this way, unless the capabilities most relevant to AI self-improvement are the last capabilities to reach human-level, though a “fast takeoff” remains possible even in that scenario.3

I did not conduct any literature searches to produce this report. I have been following the small field of HLMI forecasting closely since 2011, and I felt comfortable that I already knew where to find most of the best recent HLMI forecasting work. In the past few years, much of it has been published by Katja Grace and Paul Christiano at AI Impacts.4 As such, this report leans heavily on their work.

Grace’s summary of Michie (1973), by far the earliest expert survey, is: “Almost all participants predicted human level computing systems would not emerge for over twenty years. They were roughly divided between 20, 50, and more.” Participants were British and American computer scientists working in or near AI.

The only survey which avoids these three problems is Müller & Bostrom (2014)’s survey of the top-100 most cited living AI scientists (called “TOP100,” data here). The experts were asked:

For the purposes of this question, assume that human scientific activity continues without major negative disruption. By what year would you see a (10% / 50% / 90%) probability for HLMI to exist?

The medians strongly predict HLMI in the next 50 years, but there is wide disagreement among experts.5

I think it would be valuable to conduct roughly this same survey every 3 years, or maybe every 5 years, but try hard to boost the response rate, and maybe expand the sample to the top 300 most-cited living AI scientists.

I also think it would be valuable to conduct a Delphi-style timelines elicitation using roughly these same questions, where the participants are selected both from groups that have been thinking about these issues for a long time (e.g. FHI and MIRI), and also from among AI scientists who gave very diverse answers to the survey but who haven’t devoted their careers to studying these issues. 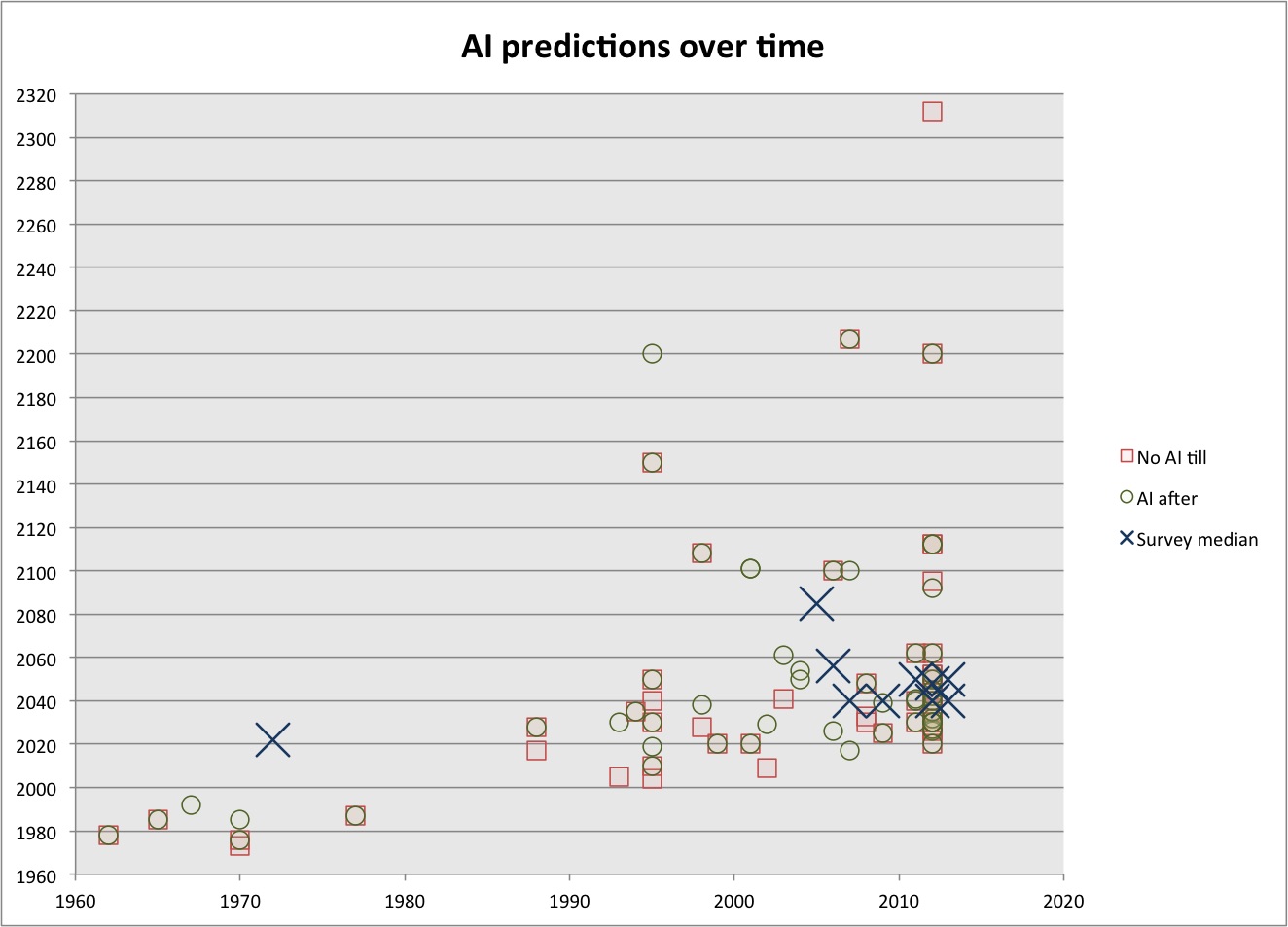 (The figure’s caption reads: “Predictions from the MIRI dataset (red = maxIY ≈ ‘AI more likely than not after …’, and green = minPY ≈ ‘AI less likely than not before …’) and surveys. This figure excludes one prediction of 3012 made in 2012, and the Hanson survey, which doesn’t ask directly about prediction dates.”)

After noting the clustering around 2040-2050, Grace lists some common complaints about AI forecasts:

Predictions about AI are frequently distrusted… [for example due to complaints] that people are biased to predict AI twenty years in the future, or just before their own deaths; that AI researchers have always been very optimistic and continually proven wrong; that experts and novices make the same predictions; or that failed predictions of the past look like current predictions.

Grace doesn’t find those complaints very compelling. While I don’t necessarily find them compelling in their stated form, there is a weaker version of the first concern that I think is worth noting. Maybe when people have no idea when a technology will be developed, they generally forecast it 10–50 years away, because 10 years feels like the soonest reasonable forecast given that there’s no clear path to the technology, while predicting that anything will take more than 50 years (without very specific obstacles in mind) feels generally overconfident. Eyeballing Grace’s chart above, it looks like the median forecast has been pushed out by about one year per calendar year, staying within the 10–50 year range.

One could further investigate this concern by collecting and analyzing long-term forecasts over time for other technological capabilities, for example ICBMs, space flight, self-driving cars, and quantum computers, if enough such forecasts exist.

Grace does have some concerns about AI forecasts:

There really do seem to be selection biases, from people who are optimistic about [HLMI] working in the field for instance, and from shorter predictions being more published…

She also worries that:

Nevertheless, these expert judgments seem to provide some information. A priori it could have been the case that experts widely agreed that HLMI is at least a century away, but that isn’t the case.

Mullins (2012) suggests that quantitative trend analyses typically yield more accurate technology forecasts than expert judgments do, or indeed than any other forecasting methodology does. What do quantitative trends suggest about HLMI timing?

One common strategy is to estimate how much computation the human brain does, then extrapolate computing trends to find out by which year we’ll have roughly the computing power of the human brain available for some reasonable cost.

Different assumptions yield different results, but most people doing this kind of exercise end up estimating that “human-level hardware” will be available for $1M anywhere from a few years ago to ~2055.9

Some weaknesses of this approach include:

Nevertheless, it’s interesting that such trend extrapolations agree so closely with expert opinion. Unfortunately, these lines of evidence are not fully independent, since it’s my impression that Moravec’s and Kurzweil’s hardware extrapolations have been widely known for some time, and may have strongly influenced many of the expert judgments made during the last ~15 years.

One method used to place a bound on how soon HLMI might arrive is to enumerate ways in which current AI systems fall short of HLMI, and then try to estimate the shortest possible path one can imagine between today’s capabilities and HLMI.

Thus one might say “Well, it seems to me that HLMI requires hierarchical planning, and long-term memory, and the integration of logical reasoning and statistical machine learning, and X, and Y, and we’re not anywhere close to solving any of those things, so we’re at least, I would guess, 20 years away.”

Or, if you think video game performance is a good benchmark for progress toward HLMI, then you might think “Right now the most general AI system can’t even beat the Atari 2600 library of games. It’ll probably be at least 15 years before it beats human-level performance for every game in the Playstation 3 library. Call me when it has beaten Grand Theft Auto V with nothing but pixel input.”

I haven’t seen anyone use much more than their gut for such lower bounds on time-to-HLMI, but it’s definitely part of the reasoning I’m using when I confidently predict we won’t have HLMI in 10 years.

In May 2013, I wrote that HLMI forecasting is further complicated by the fact that, over such long time scales, major disruptions may greatly impact HLMI timelines.

One potential disruption I named was “A tipping point in development incentives.” In retrospect, one might argue that this disruption was happening precisely as I was writing about it. As UC Berkeley AI scientist Stuart Russell has pointed out,12 in the past few years several major applications of AI have crossed a threshold of performance “from laboratory research to economically valuable technologies,” at which point “a virtuous cycle takes hold whereby even small improvements in performance are worth large sums of money, prompting greater investments in research,” with the result that “industry [has probably invested] more in the last 5 years than governments have invested since the beginning of the field.”

Other potential disruptions I describe briefly in my earlier post, with links to relevant literature, include:

Why do people disagree?

Why do experts disagree so much about HLMI timelines? Unfortunately, virtually no HLMI forecaster provides enough detail from their forecasting reasoning for someone else to say “Okay, see, I disagree with the numbers used in the model of section 5 of your analysis, and that seems to be the main reason we disagree.” Expert forecasts often seem to be drawing in part on explicit factors such as survey results or hardware trend extrapolations, but there always seems to be an important element of gut intuition as well, which the forecaster has never articulated, and may not be able to articulate.

In conversation I have occasionally been able to pin down apparent reasons for disagreement between my AI timelines and someone else’s AI timelines, but in cases when I seem to change their mind about some piece of their model — e.g. about the significance of past wrong AI forecasts, or about how one should extrapolate rates of AI progress given that the field received very little investment for most of its history compared to today — this rarely seems to shift their overall estimate, which suggests the pieces of the forecasting model we discussed may have been epiphenomenal to their timeline estimates all along. Perhaps this is also true of my own AI forecasts.

So what do we know about HLMI timelines? Very little.

Expert surveys and quantitative hardware trend extrapolations suggest HLMI is likely to be developed sometime during the 21st century, but only weakly. In general, it seems that for experts and laypeople alike, only very wide confidence intervals for “years to HLMI” are appropriate. For example, my own 70% confidence interval for “years to HLMI” is something like 10–120 years, though that estimate is unstable and uncertain.13