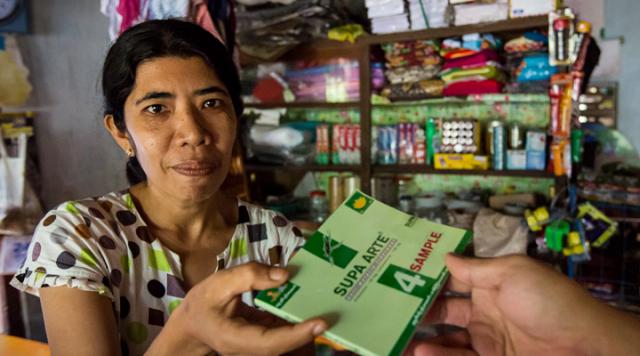 A retailer in rural Myanmar offers a customer a package of Supa Arte, a high-quality antimalarial medication which was procured and subsidized by Population Services International to help slow the spread of drug-resistant malaria. (Photo courtesy of PSI)
Organization Name
Population Services International
Award Date
8/2012
Grant Amount
$1,000,000
Purpose
To support PSI's efforts to prevent the spread of artemisinin resistance in Myanmar.
Topic (focus area)
Other areas

Good Ventures awarded a $1 million grant to Population Services International in August 2012 to support a project aimed at slowing the spread of drug resistance to the highly effective antimalarial artemisinin in Myanmar. The project was recommended to us by the Gates Foundation and is the first project we’re co-funding with another foundation. We expect this grant to help us learn how a major funder like the Gates Foundation monitors the progress and asseses the impact of a large-scale global health project.

The purpose of the project is to prevent the emergence of drug-resistant malarial parasites in Myanmar by replacing artemisinin monotherapies (AMTs) with artemisinin combination therapies (ACTs) as the primary mode of treatment available for individuals to purchase in the private sector, and by promoting the proper diagnosis and treatment of malaria. The project was estimated to cost $35 million over three years, with approximately $27.5 million previously committed by the Gates Foundation and the UK Department for International Development.

The goal of co-funding with other foundations is twofold: to support promising projects and, most importantly, to learn how experienced foundations find, monitor and assess the impact of projects. Read more about our rationale for co-funding and how we selected this project.

We’ve published updates on this project in April 2013 and November 2013.

PSI aims to improve malaria treatment in Myanmar with the primary aim of preventing the spread of drug resistance to the highly effective antimalarial drug artemisinin. PSI states that drug resistance is minimized when patients complete full treatment regimens and when treatment regimens contain combinations of drugs that attack the parasite in multiple ways.1 PSI’s project focuses on replacing therapies that contain a single antimalarial drug (artemisinin monotherapies, or AMTs) with therapies that contain artemisinin in combination with other antimalarials (artemisinin combination therapies, or ACTs),2 and on ensuring that malaria patients receive and complete a full course of ACT and that only patients with malaria receive antimalarials.3

The project will include the following primary activities:4

The project is expected to have national reach with a particular focus on a high-risk area in the eastern part of the country.12

PSI’s project, if it succeeds in helping to stop the spread of artemisinin resistance, has the potential to have a very high impact. A World Health Organization report states that artemisinin is the most effective antimalarial and that “there is currently no practical alternative treatment” for P. falciparum,13 the most deadly form of malaria.14 Artemisinin resistance has been found in countries neighboring Myanmar in the Greater Mekong region,15 and signs of resistance have been detected near Thailand’s border with Myanmar.16

There is an extensive history of the development and spread of drug resistance to other classes of antimalarial drugs. This, in turn, is thought to have led to rising child mortality rates as available drugs became ineffective.17 In particular, resistance to two types of antimalarial drugs emerged in the Greater Mekong region and likely spread from there to Africa,18 where the malaria burden is highest.19 Myanmar has by far the highest malaria burden in the region, and therefore, resistance, once in Myanmar, may be more likely to spread quickly.20 PSI reports that a high proportion of malaria treatments in Myanmar are supplied through the private sector,21 and over 70% of private sector treatments are supplied through a supplier that has agreed to work with PSI.22 A recent household survey conducted in regions at high risk of drug resistance, found that 30-47% reported that they used a private healthcare provider for their most recent case of fever.23

The project is also high risk, as the development and spread of drug resistance is not well understood and the project is has not been tried and tested previously.24

Risks to the success of the project

As discussed above, this is a high-risk project because it is an unproven approach to a problem that is not well understood. In addition to the risk of PSI’s project being an ineffective approach, there are risks that could prevent PSI from executing the project as planned. These include:

PSI plans to use the following tools to monitor and evaluate the program:

PSI has used this set of tools to collect data on anti-malarial markets in seven countries in Africa and Asia as part of an initiative called “ACTwatch.”40

In addition, the World Health Organization collects data on parasite clearance rates, a measure of the prevalence of drug resistance.41 We have not seen details of where or when this data will be collected in Myanmar. PSI notes, “the project contributes to, but wouldn’t be solely responsible for, any goal-level impact observed. Lastly, many aspects determining the nature of artemisinin resistance spread remain unclear, thus further complicating evaluation of impact at this level.”42

Use of additional funding and room for more funding

The project is projected to cost about $35 million over three years. The UK’s Department for International Development (DFID) and the Bill and Melinda Gates Foundation have committed approximately $27.5 million to the project.43

PSI told us, “At current levels of funding, PSI will conduct the planned surveys, run social mobilization campaigns, and purchase some commodities. The additional $7.5 million would allow for the purchase of additional ACTs and malaria diagnostic tests, and therefore scale up the replacement program more quickly.”44

Assuming that non-drug costs do not vary with the quantity of drugs sold (this is an aggressive assumption that likely understates the full costs of providing additional drugs),45 the cost to PSI of an average ACT treatment46 is about $1.78, which includes the cost of drugs and packaging.47 PSI estimates the cost of an additional RDT, including packaging, at $0.74.48 Thus an additional $1 million donation purchases up to 561,000 ACT treatments or 1.3 million RDTs, or a combination of the two.

Good Ventures has committed an additional $1 million for the project, leaving a funding gap of about $6.5 million. PSI hopes to secure the remaining funding for the project through new donors by the end of 2012; it does not believe that existing donors will fill the gap.49