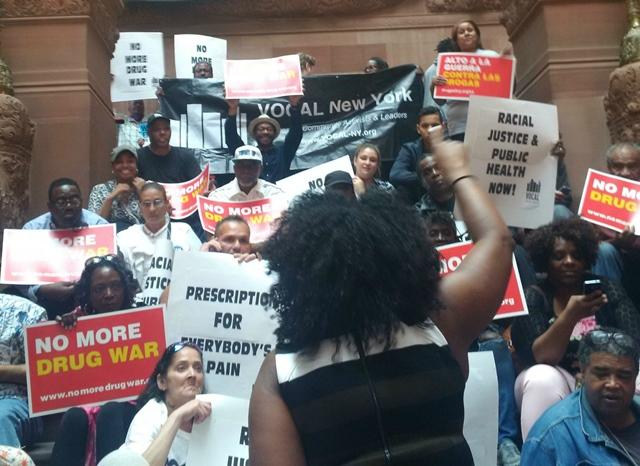 Kassandra Frederique, DPA’s New York State Director, addresses a group of advocates, including allies from VOCAL-NY, at the Albany statehouse in June 2016 before meeting with legislators to talk about drug policy reform and reparative justice.
Organization Name
Drug Policy Alliance
Award Date
3/2017
Grant Amount
$1,371,630
Purpose
To support work led by asha bandele and Kassandra Frederique to advance a public health approach to the use and sale of all drugs.
Topic (focus area)
Criminal Justice Reform

The Open Philanthropy Project recommended a grant of $1,371,630 over two years to the Drug Policy Alliance (DPA) to support the work of asha bandele and Kassandra Frederique, who plan to lead culture change and pilot project strategies to advance a public health approach to the use and sale of all drugs. When fully implemented, a public health approach shifts authority and resources to address drug use from the criminal justice system, which uses criminalization and punishment to achieve outcomes, to the health system, which focuses on treatment and reducing the harms associated with drug use. DPA has been advancing a public health approach for the past several years with a focus on policy analysis and policy reports.

We believe that it is possible for this strategy to have several positive impacts, in part based on the results of drug decriminalization in Portugal. Decriminalization means that while possession of drugs is not permitted, it is not a criminal offense, and is dealt with through administrative sanctions. Since decriminalization in Portugal in 2001, the country has experienced a slight reduction in drug use among adolescents, a substantial reduction in the number of people in contact with the criminal justice system, a significant increase in the number of people in drug treatment, and a roughly 80% reduction in deaths caused by drug use.1

We believe that moving toward a Portugal model stands a reasonable chance of significantly reducing incarceration in the U.S. While people convicted of drug crimes make up a relatively small proportion of the U.S. prison population, they make up the majority of people admitted to prison (the discrepancy is due to short average prison sentences for drug convictions). Reducing the churn of people in and out of prison would limit the overall number of people impacted by contact with the criminal justice system. Additionally, our understanding is that drug possession is often the first arrest that puts someone in contact with the law enforcement system, and increases the probability of incarceration later in life, including through technical violations of probation and parole conditions.

We decided to make this grant to enable DPA to more highly prioritize several strategies that we believe are important to achieving the goal of a Portugal-style reform in the U.S. and that we believe DPA would not pursue in the absence of the grant. These include strategies targeting culture change, a stronger focus on racial justice, and support for a demonstration project in Ithaca, New York, whose mayor has adopted a plan to implement a public health approach to drug use.2 We hope that this grant will shorten the timeline to achieving substantial drug policy reforms in several states and influence conversations about reducing penalties for drug crimes.

Update: In December 2018, $28,370 of unspent funds were returned by DPA. The “grant amount” above has been updated to reflect this.