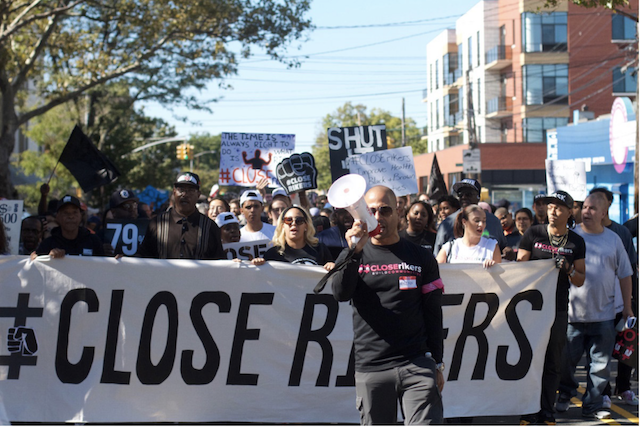 This page was reviewed but not written by the grant investigator. JustLeadershipUSA staff also reviewed this page prior to publication.

In December 2016, the Open Philanthropy Project recommended two grants totaling $4,000,000 over two years to JustLeadershipUSA (JLUSA) to support its campaign to close the Rikers Island Prison Complex in New York City (#CLOSErikers). See the “Case for the grant” section of our 2015 grant page for rationale on why we decided to support this project.

Our Program Officer for Criminal Justice Reform, Chloe Cockburn, was excited to continue supporting JLUSA due to her confidence in the leadership of Glenn Martin and his team, as well as her impressions of JLUSA’s progress in the year between the previous grant and this one. In particular, she was pleased that JLUSA: met their infrastructure and hiring goals; established a strong media presence; successfully built a coalition of more than 100 New York City organizations and hosted well-attended, bi-monthly meetings; worked with allies to secure an agreement from the Mayor that she believes will likely result in a small but important reduction in the standing population of minors (aged 16-17) detained at Rikers; partnered with others to help pass a “speedy trial” bill through the New York State Assembly with bipartisan support; worked with campaign supporters to lead the effort to stop the construction of a new $500 million jail facility on Rikers; and altered the political discourse around the closure of Rikers—for example, by encouraging the Speaker of the City Council to propose an Independent Commission on Criminal Justice Reform (Glenn Martin served as one of the Commissioners), creating a public platform for the City Comptroller to announce support for the closure of Rikers, and securing public support for the closure of Rikers from prominent voices, including a number of other elected city and state officials. A very significant development, which occurred in the time between our decision to recommend these grants and our publishing of this page, was that New York City Mayor Bill de Blasio publicly committed to closing Rikers1 within 10 years. While much work remains to actually guarantee closure, Chloe believes this announcement was a result of JLUSA’s leadership on the #CLOSErikers campaign.

Funding for these grants was intended to expand JLUSA’s overall campaign capacity over 2017 and 2018 to continue advocating for the closure of Rikers. Due to the nature of the campaign and its evolving conditions, it was difficult to predict exact uses of these grant funds at the time of the recommendation. Examples of potential expenditures discussed with JLUSA included:

These grants fall within our work on criminal justice reform.

One of these grants was made by a 501(c)(4) social welfare organization, to which we occasionally make funding recommendations.