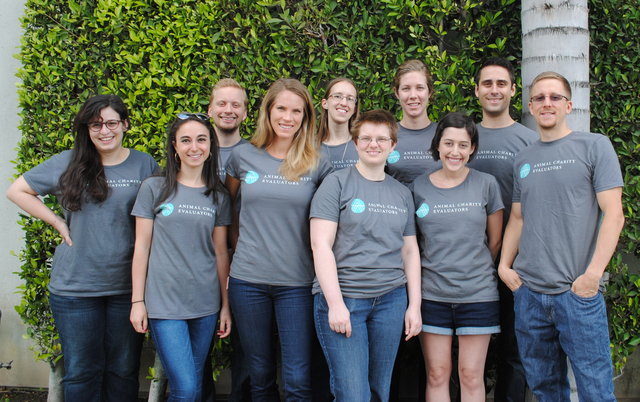 This page was reviewed but not written by the grant investigator. ACE staff also reviewed this page prior to publication.

The Open Philanthropy Project recommended a grant of $500,000 over two years to Animal Charity Evaluators (ACE). ACE is an organization in the effective altruism (EA) community that does research to identify the most effective animal welfare charities and recommend them to donors. Our grant is intended to help ACE scale up and address what we view as some of its current shortcomings.

This grant falls within our work on farm animal welfare, one of our focus areas within U.S. policy.

ACE is an organization within the effective altruism (EA) community, and was originally founded in 2012 as a project of the Centre for Effective Altruism. Its primary activity is evaluating animal-focused charities and sharing its top recommendations on its website. On the whole, we view ACE as a well-run organization that shares our goal of improving animal welfare as much as possible (though we do also have some concerns about the organization, discussed below). We’ve found ACE’s Executive Director, Jon Bockman, to be highly capable, focused on maximum impact for farm animals, and willing to make changes based on criticism that ACE receives; we also have generally positive views of several other ACE staff.

While our grant is unrestricted, the rough spending plan ACE has shared with us includes:

The case for this grant, as we see it, rests on the following:

We consider ACE the best-positioned group to encourage animal welfare charities to focus more on efficacy and to critically examine their own impact, and we expect this to be quite valuable. We are also hopeful that ACE can help generally attract more donors and activists to support and increase their engagement with effective farm animal advocacy. (Although ACE does not appear to us to be as effective at social media outreach or attracting new activists as some other animal welfare organizations, we expect there to be value in expanding these efforts beyond those groups.)

Overall, we think ACE offers good recommendations that help direct money to effective groups. However, we have had a number of reservations about its work in the past (some of which we now feel have been mitigated):