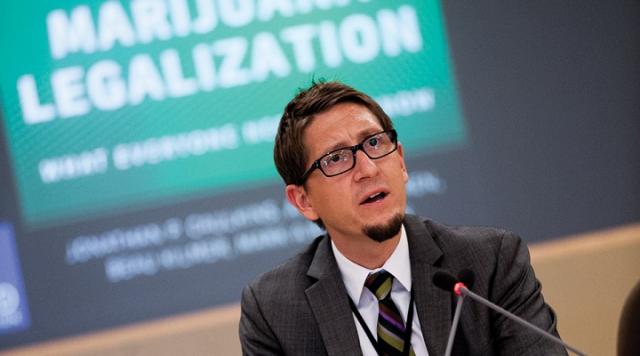 Beau Kilmer, co-director of the RAND Drug Policy Research Center and leader of the Vermont study. (Photo courtesy of the RAND Corporation)
Organization Name
RAND Corporation
Award Date
8/2014
Grant Amount
$103,000
Purpose
To enable researchers affiliated with the RAND Drug Policy Research Center to conduct a study about the consequences of legalizing marijuana in Vermont, on behalf of the State of Vermont.
Topic (focus area)
U.S. Policy

Staff of the RAND Corporation reviewed this page prior to publication.

Vermont is considering becoming the first state to legalize the production and possession of recreational marijuana through the state Legislature rather than through a ballot measure, which may give it the potential to weigh different legalization options in a more nuanced way than other states have done.

In May 2014, the Governor of Vermont signed a bill into law requiring his Secretary of Administration to produce a report about the consequences of legalizing marijuana (with no explicit funding source for the study). The RAND Corporation requested funding from the Open Philanthropy Project to be able to conduct a thorough report, written for policymakers, that would be useful both for Vermont and for other states and localities exploring marijuana legalization in the future. While some report would be produced in the absence of the Open Philanthropy Partnership’s funding, we believe that providing funding will likely improve the quality of the report as a guide for policymakers.

Given our previous interest in the issue and the potential for influencing the policy in Vermont and beyond, Good Ventures decided to award $103,000 to the RAND Corporation for completion of the report.

Rationale for the Grant

Good Ventures has identified drug policy reform as a priority area for further investigation through possible learning grants. Through the grants we have given so far, and especially through the work of Mark Kleiman, we have come to believe that it is important to think about how drug legalization or decriminalization is done, and not just whether it is done.

The RAND Corporation is a “nonprofit, nonpartisan research organization that [aims to] help … improve policy and decisionmaking through research and analysis.”1 Our general impression is that RAND is a well-respected, non-partisan research institution.2 According to its website, the RAND Drug Policy Research Center “has conducted research [since 1989] to help community leaders and public officials develop more effective ways of dealing with drug problems…. The Center’s goal is to provide a firm, empirical foundation on which sound policies can be built.”3 Our impression is that Beau Kilmer, the Center’s co-director and the leader on the report, is a widely-respected researcher;4 he is also a frequent co-author with one of our other grantees, Professor Mark Kleiman at UCLA.

Vermont is considering becoming the first state to legalize recreational marijuana use through the state Legislature rather than through a ballot measure,5 which may give it the potential to weigh different legalization options in a more nuanced way than other states have.

In May 2014, the Governor of Vermont signed a bill into law requiring the Secretary of Administration to produce a report about the consequences of legalizing marijuana.6 This puts Vermont in the position of being able to examine other jurisdictions’ experiences with marijuana regulation to inform future discussions about its own marijuana policy.

RAND aims to write a report, targeted at policymakers, that will be useful both for Vermont and for other states and localities looking for a summary of the costs and benefits of different ways to regulate marijuana. While the law sets out some specific topics that the report must cover (e.g., “savings or costs to the State that would result from regulating marijuana”),7 our understanding is that the majority of the report would likely be a literature review, written for policy makers, of the experiences of other locations that have regulated marijuana (Colorado, Washington, Uruguay). People have written about the experiences of those locations before, but, to our knowledge, it is not summarized in one place or written in a format accessible for policymakers.8

After the report is finished, it will be public on RAND’s website and available for other jurisdictions looking for a useful summary of the tradeoffs associated with different approaches to regulating marijuana. In keeping with the statutory requirement, the report will be completed by January 15, 2015.9

Vermont’s bill did not appropriate any funds for the purpose of carrying out that study, but the Secretary of Administration was able to find $20,000 to help fund the study.10 Beau Kilmer believes, however, that a useful study would cost at least $123,000, with the bulk of funds devoted to paying contributors for their time.11 Kilmer reports that he sought funding from other foundations but was unable to secure any additional funding.

Given that a report is required by law, one would certainly be produced in the absence of funding from Good Ventures; however, the report would be produced by less expensive (and presumably less experienced) researchers rather than RAND.

This is a relatively low-risk grant, especially since the grant size is relatively small. Potential risks include:

We believe that this grant is worth making. It seems reasonably likely that Vermont will legalize or regulate marijuana in some way, and so a high-quality report will both help inform Vermont policymakers and increase the likelihood that reform is done in a thoughtful way. Even if Vermont ultimately decides not to legalize marijuana, a report like this can be helpful for policymakers in other jurisdictions considering marijuana legalization.

Typically, this section of our grant pages are focused on our future plans for learning and followup. In this case, significant delays in the process of preparing this writeup have meant that at the time of writing, the commissioned report has already been released (PDF archive).

Notes from our conversation with Beau Kilmer after the report’s release are available here. We conducted a limited review of media stories about the report’s launch, and were generally pleased with the tenor and content.12

We have not yet attempted to gauge the impact of the report on policy in Vermont or elsewhere, and may or may not do so in the future, depending on whether this remains an area of interest for future engagement.

In June 2014, Mark Kleiman (a grantee) alerted the Open Philanthropy Partnership to the existence of a time-sensitive research opportunity in Vermont, and put us in touch with Beau Kilmer. That contact led to a series of conversations, culminating in the awarding of this grant in July.

We shared a draft version of this page with RAND staff prior to publication.