Have we hit peak plant-based meat?

After two years of record sales growth, US retail sales of plant-based meat stagnated in 2021. Sales flatlined at $1.4B last year, as the velocity of sales — how quickly it flew off shelves — fell by 14%, per new data from the Good Food Institute and Plant-Based Foods Association. And because prices rose, the volume of plant-based meat sold fell by 7% in the year through February 2022.

Animal-based meat retail sales also fell by about 8% by volume over the same time period. But the value of retail meat sales rose because meat prices were up more than plant-based prices. And the volume of meat sold last year still rose thanks to soaring restaurant sales.

Indeed, Beyond was especially hard hit. Its US revenues fell for the first time last year, despite what it described as “increased investments in marketing activities.” It didn’t help that KFC, Dunkin’, Pizza Hut, and Panda Express all ended limited time offerings of Beyond products, or that analysts recently reported weak sales of Beyond’s McPlant at the 600 US McDonald’s outlets trialing it.

All this has led to a plunging share price for Beyond Meat, and a flurry of pessimistic news articles, like this one in the Financial Times entitled, “Has the appetite for plant-based meat already peaked?” Has it? 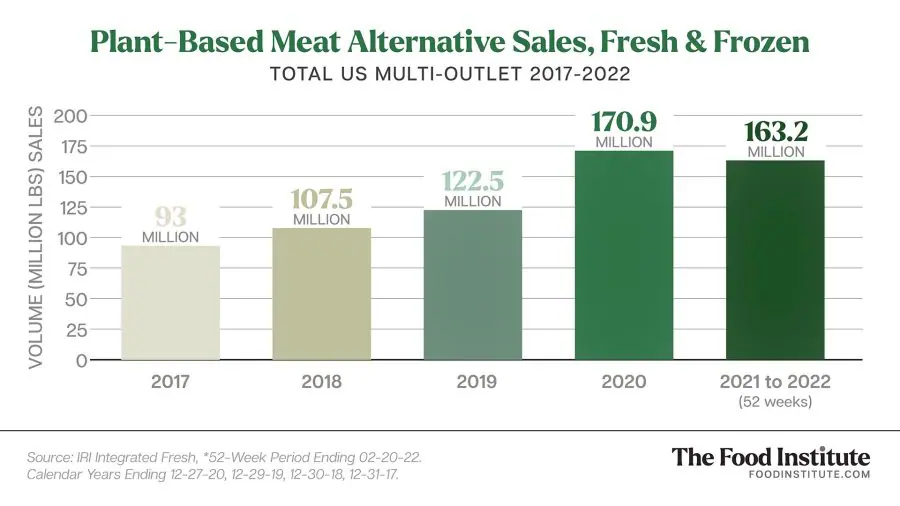 A bump, not a peak

I don’t think so. The most likely explanation of the drop in plant-based meat retail sales is that 2021 just saw a one-off correction after a year of unusually high growth. In 2020, US plant-based meat retail sales rose by 40% by volume, as people stockpiled food during COVID. Just maintaining that elevated sales level was always going to be hard.

Previously, plant-based meat retail sales had been growing by about 15% annually. The slight dip in 2021 just restores this roughly 15% growth rate for 2019-21. That’s consistent with what happened with plant-based ice-cream, cheese, and butter, each of which saw dollar growth rates fall by 25-40 percentage points in 2021 (though all still had slight positive sales growth).

Meanwhile, Beyond’s woes most likely reflect a healthy increase in competition in the plant-based meat space — and less healthy supply chain problems at Beyond. Beyond complained of “frequent aggressive discounting” by its competitors, but that’s good news for broader adoption of plant-based meat. The two other publicly-owned companies with plant-based meat brands, Maple Leaf Foods (Lightlife and Field Roast) and Kellogg’s (Morningstar Farms), made similar complaints of fresh competition in reporting weak 2021 sales.

Other signs for plant-based meat remain robust. America’s biggest retailers continue to bet on category growth; most recently, Amazon and Kroger both announced major new plant-based meat lines, the latter in collaboration with Impossible Foods. So do investors, who continue to fund expansion in the space. And Google Trends data suggest interest in the category remains pretty constant.

Promising, but not inevitable

Still, I think the slump in 2021 plant-based meat sales is an important reminder that we have work to do. The downturn prompted Maple Leaf Foods to ask why sales were down. It says its recent (unpublished) review found that “trial rates were super high … but consumers’ needs simply were not met, and they did not repeat purchases. As a result, the category did not reach expected levels of habituation, had very high lapse rates and very low buy rates.”

That’s a bit extreme. Last year, 64% of plant-based meat buyers purchased it multiple times — far short of meat’s near-100% repeat buy rate, though not too far short of plant-based milk’s 76% repeat rate. But Maple Leaf is probably right about consumers’ needs not being met, especially on taste and price.

A 2019 blind taste test of 107 American omnivores found that only 30-45% liked each of the plant-based chicken products they sampled, while 85% liked the real chicken. (More, 30-60%, liked the plant-based burgers, but 70% liked the beef burgers.) Yet, despite the worse taste, plant-based meat is still roughly twice the price of animal-based meat at retail: over the last year, refrigerated meat alternatives averaged $8.14/lb against $4.14/lb for animal meat.

The actions of companies, investors, and advocates can make a big difference. Plant-based meat makers can invest more in R&D and resist pressure to go to market quickly with inferior producers. Investors can help by giving them longer timeframes and funding more scale-up infrastructure. And advocates can lobby for the kind of public funding that helped secure dramatic price reductions in solar energy, batteries, and electric cars.

Above all, I think the recent sales slump is a corrective to proclamations in recent years that the takeover of plant-based meat is “inevitable.” But I think this should be a call to action, not despair: it makes the actions of everyone reading this newsletter all the more important. If plant-based meat is no sure bet, your advocacy, and funding, for multiple effective farm animal advocacy approaches is critical. And your work to accelerate the adoption of plant-based meat could help determine its success.