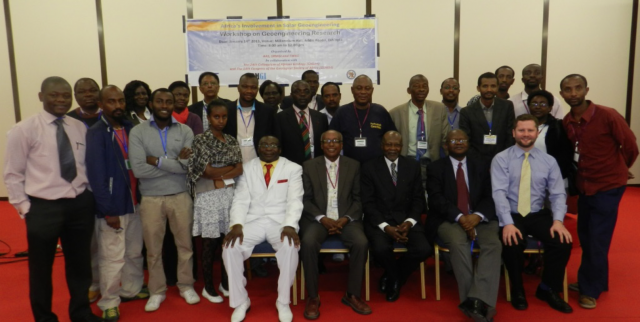 SRMGI staff reviewed this page prior to publication.

The Solar Radiation Management Governance Initiative (SRMGI) works to promote the good governance of SRM by building capacity and understanding around SRM, especially in the developing world. SRMGI is neither in favor of nor against SRM research and use. Our impression is that it is a well-connected and well-positioned organization in a sparse space.

Based on these considerations, the Open Philanthropy Project decided to recommend a grant of $500,000 to support SRMGI via the Environmental Defense Fund (EDF).

In our shallow investigation of this cause, we describe the governance of solar radiation management (SRM) as follows:

We believe geoengineering research and governance is a promising philanthropic space. Because it is a relatively thin space (not many researchers or organizations currently devoted to it), a specialized hire in this area may need to very actively field-build and generate interest from potential grantees who are not currently seeking (additional) funding to work on geoengineering; we remain uncertain of how wise or efficient such a strategy would be at this time. We might make a specialized hire if we found an outstanding fit, but might also simply continue to monitor the space and capitalize on giving opportunities that arise.

It was with essentially this mindset that we made this grant to SRMGI. More recently, we have decided to focus our work on global catastrophic risks primarily on biosecurity and potential risks from advanced artificial intelligence. See our September 2015 update for more details.

The Solar Radiation Management Governance Initiative (SRMGI) was launched in March 2010 by the Environmental Defense Fund (EDF), the Royal Society, and the World Academy of Sciences (TWAS). The work of SRMGI is overseen by Steven Hamburg (EDF), John Shepherd (The Royal Society) and Qasim Jan (TWAS). The project director (part-time) is Andy Parker, a research fellow at the Institute for Advanced Sustainability Studies in Germany. SRMGI aims to promote global conversation about SRM and governance of research, particularly by bringing in perspectives from stakeholders in developing countries. SRMGI is neither in favor of, nor against, SRM geoengineering and related research.1

The majority of SRMGI’s previous funding has come from the Royal Society and the Environmental Defense Fund. SRMGI has also received funding from Zennström Philanthropies, the Carbon War Room, and the Fund for Innovative Climate and Energy Research (FICER, funded by Bill Gates).2 SRMGI also ran a series of workshops in Africa in partnership with the African Academy of Sciences, which was funded by a grant from the Inter-Academy Panel (IAP) and supported financially and logistically by UNESCO.

Our impression is that, globally, there is currently little work focused on improving the governance of SRM. We consider this grant to be an opportunity to build up a sparse field. Our impression that SRMGI is well-connected in the field, has a neutral stance regarding what sorts of SRM research ought to be done, and acts as a facilitator of conversation, leads us to believe it is well-suited to helping us better understand SRM.

We are inclined to agree with SRMGI’s case for increasing the engagement of experts in the developing world with SRM governance issues, based on the arguments that people in developing countries will be most affected by environmental change, that SRM governance must include the perspectives of people in developing countries, and that this inclusion must happen earlier rather than later in the research and governance process.3 SRMGI appears to be well placed to fill this niche. In conversations, we have found Andy to be very thoughtful about the potential benefits and risks of various strategies for improving SRM governance.

Our conversations with SRMGI indicate that it currently has very limited available funds and that past funders are not expected to renew funding for a variety of reasons. We believe that this grant would allow SRMGI to significantly expand its activities, and that it is unlikely to receive this level of funding from any other source.

In addition, we are aware that both geoengineering broadly and SRM specifically are controversial topics. We see some risk that any involvement with these fields may cause reputational damage to the Open Philanthropy Project, even in cases (such as this grant) where we do not intend to show support for the underlying technology. This risk is not specific to this grant.

While we recognized the risks above, we did not feel that any of them were significant enough to give reason not to go ahead with this grant.

The Open Philanthropy Project granted $500,000 to the SRMGI project over two years. We do not necessarily expect SRMGI to spend the granted amount within two years.

Proposed use of funds

Our expectations for this grant are that:

We hope, though we do not necessarily expect, that regional meeting attendees spread knowledge of SRM governance issues to local colleagues, generate local discussion, and more generally build capacity for and understanding of SRM research and governance in the developing world.

The extent to which we follow up on this grant will depend on how much capacity we have to devote to causes outside our top priorities within global catastrophic risks. In following this grant, we would hope to learn more about the field of SRM governance and about how developing world engagement affects governance.

We came across SRMGI while investigating SRM governance as a cause, as part of our research into geoengineering more broadly. The Open Philanthropy Project spoke with Andy Parker several times, and with a number of other geoengineering scholars, both to learn about the cause as a whole, and to learn more about SRMGI as an organization. Public notes are available from several of these conversations: