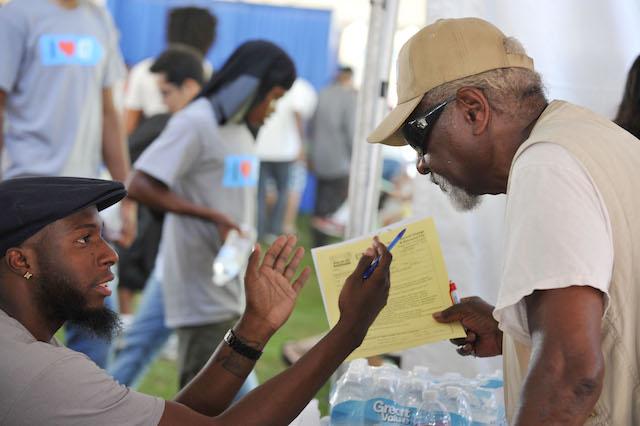 CSJ staff member Aswad Thomas (left) explains how to file a petition to have an old felony conviction reduced to a misdemeanor under Proposition 47 at a record change fair in LA in September 2015 (photo courtesy of ASJ)
Organization Name
Alliance for Safety and Justice
Award Date
2/2016
Grant Amount
$1,750,000
Purpose
To support the Alliance for Safety and Justice
Topic (focus area)
Criminal Justice Reform

Note: this page summarizes the rationale behind two grants: 1) a grant that the Open Philanthropy Project made to the Alliance for Safety and Justice, 2) a personal gift that Cari Tuna made to Vote Safe.

ASJ staff reviewed this page prior to publication.

The Alliance for Safety and Justice (ASJ) is a national organization seeking to reduce overreliance on incarceration in states across the U.S. and to promote new safety priorities rooted in community health and well-being. It aims to build off and scale up the success of Californians for Safety and Justice (CSJ), a state-based advocacy and policy reform organization that, among other accomplishments, developed the first statewide network for crime victims that support justice reform. Vote Safe, the sister 501(c)(4) organization of CSJ, also crafted and ran the successful campaign for Proposition 47, a California ballot measure that reduced incarceration by changing several low-level felonies to misdemeanors, and reallocating the prison cost savings to prevention and treatment.1

Building off these successes, ASJ aims to partner with state-based advocates across the country to expand state-based capacity to advance justice reform, launch a national networking center for state advocacy, and build public support for new safety priorities that can reduce over-incarceration while improving community health and well-being.

We believe that ASJ’s approach – to act as a national organization coordinating state-level efforts – may be able to help translate increased national attention towards criminal justice reform into major policy victories at the state level.

Criminal justice reform is one of our focus areas within the category of U.S. policy. Although we consider criminal justice reform to be an unusually tractable cause within U.S. policy, our understanding is that most states (excepting California and New York) have seen only slight decreases in incarceration as a result of reform campaigns. We believe this may be due in part to limited state-level capacity; in many states, there does not appear to exist an organization focused on reducing over-incarceration with the capacity to advance policy reform or run successful campaigns.

In addition, the public may not have a clear understanding of what changes could be made to the current criminal justice system beyond simply reducing incarceration. Our impression is that this lack of a clear vision for safety could make reform efforts vulnerable to collapse in the face of shifts in crime, strong pushback by criminal justice reform opponents, or simply waning attention on the issue, any of which may or may not come into play.

Our intention with this grant is to help ASJ to build off the success of Californians for Safety and Justice (CSJ) (which will continue to exist, and will act as the flagship for the growth and development of ASJ). CSJ’s sister 501(c)(4) organization, Vote Safe, led the campaign to pass Proposition 47, a ballot measure that according to one study resulted in 13,000 fewer incarcerated people in California in the first year after its passing.2 ASJ has told us that the measure is also estimated to give nearly one million Californians an opportunity to remove nonviolent felonies from their criminal records and access new opportunities for stability.

Led by Lenore Anderson and Robert Rooks (both also leaders of CSJ), ASJ will be a national organization focused on building capacity for state-based advocacy, advancing policy reform in its partner states, and gaining majority support nationwide for new safety priorities focused on community health and well-being.

ASJ’s overall policy focuses are sentencing reform and reallocation of resources from prison spending to community safety and health (similar to the “justice reinvestment” approach about which we have written in more detail in our cause report on criminal justice reform).

ASJ plans to work toward its goals using three different strategies, each of which will require dedicated staff.

Chloe Cockburn, our Program Officer for Criminal Justice Reform, has a very positive view of ASJ’s leadership and their track record with CSJ. Our perspective on ASJ’s leadership is based to a large extent on Chloe’s view and contributes significantly to our expectations of ASJ as an organization.

Long-term hopes for the grant

We are highly uncertain what to expect in terms of ASJ’s long-term development. ASJ’s plans are very ambitious, and the landscape for criminal justice reform could change considerably over the next 10 years. However, based on ASJ’s plans, and assuming ASJ meets its first-year funding target of around $10 million, we think the following is an optimistic but plausible projection for the grant:

ASJ has told us that it could effectively use up to $10 million in its first year, though it could operate on as little as $2 million. ASJ would use additional funds beyond $2 million to take on more partner states and scale up its communication work.

We believe there are a number of other funders interested in providing lower levels of support to ASJ. However, our impression is that foundations’ priorities often do not lie in capacity building and that they may not choose to support long-term strategic advocacy plans to change entrenched systems. As a result, we believe that these funders might not provide the level of support that ASJ (or we) think is appropriate.

We have a number of reservations regarding this grant:

We expect these grant funds to be used within roughly the next year. During this time, we expect to have a conversation with ASJ staff every 2-3 months, with public notes if the conversation warrants it.

Questions we plan to try to answer about this grant include: