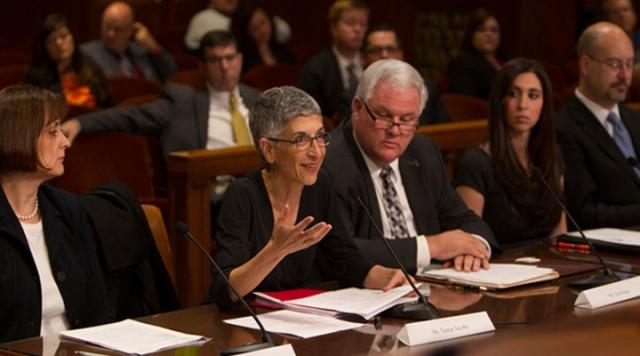 Note: ImmigrationWorks staff reviewed this page prior to publication.

One significant change in the area of immigration policy since our 2014 grant is that, at that time, it still seemed somewhat possible that Congress would pass a comprehensive immigration reform (CIR) bill in the near future. Congressional debate today now seems to be focused on more minor immigration issues and on laying the groundwork for potential action on CIR after the 2016 presidential election.

IW was founded by center-right journalist Tamar Jacoby in 2008 to organize small employers of lower-skill immigrants, mobilizing them to advocate in Washington, D.C. and in their own communities across the U.S. The Washington-based operation supports this decentralized effort and works in parallel on Capitol Hill to advance policy.2 For more background on IW as an organization, see our write-up of Open Philanthropy’s 2014 grant to IW.

In the write-up for our 2014 grant to IW, we included some key questions that we intended to use to follow up on that grant. Answers to some of these questions are below.

How did IW end up spending the grant?

Open Philanthropy’s rough expectation of how IW would use the $285,000 grant was:

However, the grant was unrestricted and was made with the understanding that IW could change the proposed allocation of funds if it saw fit.

IW raised about $170,000 less in fundraising for 2014 than it anticipated at the time of Open Philanthropy’s grant, due mainly to the loss of momentum for comprehensive immigration reform (CIR) in Congress following Eric Cantor’s primary defeat.

We view our grant (in effect, if not literally) as having provided roughly $100,000 in general operating support each year for 2014 and 2015 to fill this unexpected funding gap, as well as roughly $90,000 for public opinion polling.

Did the grant succeed in materially growing IW’s capacity? Did any of the things IW spent the grant on seem to persist?

Because the grant funding was used to fill a gap in general operating costs rather than make a new hire, our grant did not result in IW growing its capacity, though the grant may have prevented IW from needing to lay off additional staff. In May 2015, Tamar Jacoby and IW’s main consultants took 25% salary cuts in order to keep IW solvent, though IW was quickly able to find the funding to make up the gap. IW now expects to do better than break even on revenue for 2015.

In addition to serving as President and CEO of IW, Tamar Jacoby also founded and serves as President and CEO of Opportunity America, a Washington think tank that works to promote economic mobility (e.g. through increased workforce participation, employee training, asset ownership and entrepreneurship). Jacoby has considered shifting focus away from immigration policy to prioritize her work with Opportunity America, and we believe there is a reasonable probability that Open Philanthropy’s grant played a role in keeping Jacoby active in the area of immigration.

What did the public opinion research find? Is it helpful?

We found press coverage of the public opinion and messaging research3 to mildly exceed our expectations, and we were somewhat surprised to learn that 70% of respondents claimed to support a year-round guest worker program. ImmigrationWorks told us that this finding, and the finding that a majority of people falsely believed that such a program already exists, would be very helpful for immigration advocates going forward.

However, the results of the research to determine which of several messages was most persuasive were underwhelming. The best-performing messages were related to the economic benefits of immigration and holding migrant workers accountable, but neither seemed exceptionally effective. Messaging on creating opportunities for immigrants performed well with IW’s elite subsample, but poorly with the general population.4 IW found its combined messaging boosted support for “a visa program that would enable immigrants to enter the U.S. legally to work in physically-demanding, year-round jobs ” from about 68% to about 75%.5 This result strikes us as fairly weak, though we are not sure how to benchmark it.

It is too soon to have a sense of whether other groups will adopt the messages that IW tested.

What impact, if any, did IW’s advocacy work end up having?

We do not see IW’s advocacy work as having had a definite impact since the grant, although we do not consider this particularly surprising or disappointing given the overall decrease in interest and support for immigration reform in Washington during this period.

Case for the new grant

We see IW as a small organization which shares the Open Philanthropy Project’s goal of increasing lower-skill immigration, an aspect of immigration policy that does not receive much other support. IW is experiencing a funding shortfall while focus has shifted away from immigration reform in Congress, and we believe that this grant could play a significant role in keeping IW operating at its current capacity. In particular, we believe that our grant will allow IW to continue to do more work on immigration, rather than shift resources partially or entirely to Opportunity America (or close down).

Given the current state of the immigration policy debate in Washington, we do not expect to see major evidence of impact from IW in the near term. However, we are hopeful that our grant will allow IW to continue operations and maintain good relationships with policymakers and others so that it can be present and involved when the issue of CIR is raised again in Congress (likely in 2017). Ultimately, Open Philanthropy decided to grant $150,000 over 18 months because we saw that as enough to keep IW going until 2017 and the next Congressional term.

IW has seen a significant decrease in funding from its major donors over the past few years as interest in immigration reform has waned, and it expects this trend to continue this year. For this reason in particular, we see IW as having a strong case for room for more funding.

We see a number of risks associated with this grant:

We hope that this grant will help put IW in a good position to engage in any discussions around immigration that begin after the 2016 presidential election. We hope that, by this stage, IW will have a number of policy proposals ready for implementation, which ideally will already have some support from and traction with the relevant decisionmakers.

We began discussing the possibility of renewing our support of ImmigrationWorks as the previous grant period drew to a close. Tamar Jacoby spoke with us about potential activities for ImmigrationWorks over the next 18 months, and about ImmigrationWorks’ current funding situation.

“ImmigrationWorks Foundation is one pillar of a two-pillared arch.
The other pillar, ImmigrationWorks USA, is a 501(c)(4) organization devoted to helping business owners make their views about immigration known to legislators, both at the state level and in Congress. ImmigrationWorks USA (IW USA) is organized as a federation, linking state-based business coalitions in some 20 states. Its primary mission is recruitment: identifying likely employer advocates, reaching out to them, creating coalitions – and ultimately building a grassroots army of informed, engaged employers prepared to pick up the phone and call members of Congress, urging them to pass a comprehensive reform package. IW USA works to jumpstart local business coalitions, helps them grow, provides them with advice and assistance in their state-based legislative battles, plans and participates in local media campaigns and teaches affiliates how to engage in effective grassroots lobbying.
ImmigrationWorks Foundation (IWF), by contrast, is a 501(c)(3) organization. Its twin goals: educating and informing the business owners who make up the IW USA network and helping them frame the message they get out to the media and the public in their states.
In other words, IW USA is about recruitment and action, while IWF is devoted to communications. The two organizations are strictly separate – and IWF steers clear of the advocacy work at the center of the IW USA mission. But the two entities are designed to complement each other, one rallying the troops, the other making sure they know what to say and how best to say it. IWF provides IW USA affiliates with research, analyses, talking points and other communications tools. It works to keep the employers in the network informed about immigration issues, teach business leaders how to speak to the media about immigration and document the impact of immigration and immigration-related policies on the economy, both locally and at the national level.
The two organizations’ shared goal: to make sure that business is no longer missing from the immigration debate.” IW Carnegie and Four Freedoms Reports, pgs. 3-4.