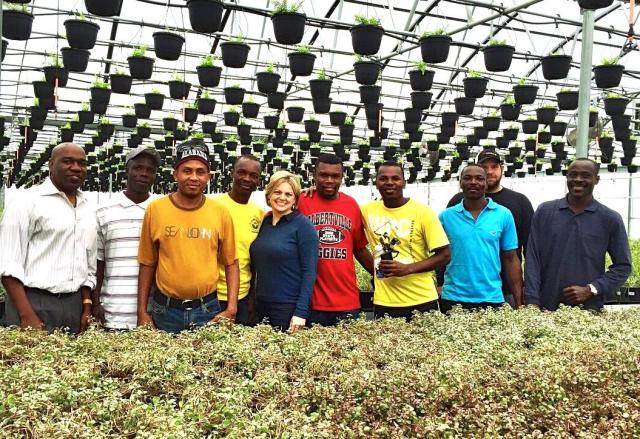 Protect the People staff reviewed this page prior to publication.

In 2014, the Open Philanthropy Project recommended a $1,490,504 grant to the International Organization for Migration (IOM) for a 14-month pilot project aiming to give 100 Haitian workers access to H-2A visas for seasonal work in the U.S. Unfortunately, the pilot project fell well short of our hopes; although the project was able to secure many job requests, difficulties in the visa process meant that only 14 workers ended up coming to the U.S. in 2015 through the project (more in our December 2015 update). We still think that access to H-2A visas could produce substantial income benefits for Haitian workers, and that there is a possibility that a project to connect Haitian workers to U.S. employers could lead to many more Haitians having access to H-2A visas in coming years, but our estimate of the likely potential flows has been significantly reduced, and accordingly we decided not to renew support for the IOM project as previously constituted.

Protect the People (PTP), which supported IOM on the initial project, expressed interest in continuing to attempt to facilitate Haitian access to the H-2A program at a substantially lower level of budgetary support. After some further investigation and discussion, we decided to recommend a grant of $550,000 to support PTP’s plans, with additional support if more workers are able to participate in the project.

Although we decided to support PTP’s work in 2016, we see a number of significant risks that could result in far fewer people than PTP projects being able to participate. We plan to assess this grant largely based on the income earned by Haitian workers through the project.

As part of our work on immigration policy, in July 2014 the Open Philanthropy Project made a grant for a pilot project led by the International Organization for Migration (IOM) intending to give 100 Haitian workers access to H-2A visas for seasonal work in the United States. The total amount requested for the 14-month project was $1,490,504. We disbursed the first tranche of $450,655 at the start of the project, with the remaining funding conditional on the project leaders identifying U.S. employers willing to employ 100 Haitian workers, and on evidence that the Haitian workers would be able to obtain H-2A visas. In December 2014, we decided to disburse the second tranche of $1,039,850, even though our first condition had not been met. At that time, IOM and PTP had secured job requests from a number of U.S. employers for the fall harvest, so we believed it was reasonably likely that workers would arrive later in the year.

We reviewed the grant at the end of the pilot, and found that only 14 Haitian workers were able to obtain H-2A visas and work in the U.S. through the project, and each of these workers stayed in the U.S. and earned wages for shorter than the six-month average we initially estimated. Our understanding is that this was largely due to difficulties in the visa process, including delayed Department of Labor (DoL) approvals for employer requests to hire overseas workers and decisions made by the U.S. embassy in Port-au-Prince to deny visas to a number of workers whose job requests were approved. Accordingly, our estimate of the likely potential flows, and associated income gains, has been significantly reduced, and as such we decided not to renew support for the IOM project as previously constituted.

Protect the People (PTP) expressed interest in continuing to attempt to facilitate Haitian access to the H-2A program at a substantially lower level of budgetary support. (PTP was a subcontractor for IOM on the initial pilot project as a for-profit consultant, but has since filed for and received 501(c)(3) status.)

The Open Philanthropy Project decided to recommend a grant of $550,000 to Protect the People (PTP) to continue to try to facilitate Haitian access to the H-2A program for another year.

Because of time sensitivity in starting the project, we recommended that Cari Tuna make a personal contribution of $50,000 to PTP to begin the work. We then recommended an initial grant of $500,000 to support PTP’s work on this project. The grant is structured conditionally, such that if the project enables more than 75 Haitian workers to use H-2A visas to work in the U.S., we will provide PTP with additional funding to cover costs for the additional workers. This support will scale up proportionally with the number of workers participating in the project, up to a maximum grant total of $1,000,000 for 2016. PTP currently projects that around 150 Haitian workers will be able to participate in the program in 2016, though our best guess is that the total is likely to be lower (because we anticipate that some of the problems previously encountered in the visa process may recur).

We estimate that each Haitian worker in the U.S. earns about $5,000 for about 3 months of work. Since agricultural workers in Haiti earn around $1,000 per year, this increase in income is substantial.1

Although the pilot project failed to enable many Haitians to work in the U.S., we think that this could have been due to bad luck more than fundamental problems in the program design. In particular, some of the problems that led employers and workers not to be able to participate in the project in 2015 seem unlikely to recur. For instance, one employer canceled 44 job orders when a challenge from the U.S. Department of Labor led to delays. PTP has told us this is unlikely to be an issue again this year, since the employer plans to request H-2A visas from Haiti earlier in the year.2

PTP currently projects that it will be able to provide 164 Haitian workers access to jobs in the U.S. from three employers (employers #1, #2, and #3 mentioned in our review of the pilot project), and it plans further outreach to recruit other employers. Given the challenges faced by previous efforts to facilitate Haitian access to the H-2A program, particularly in securing permission from different parts of the U.S. government, we would be somewhat surprised if 150 or more people are able to participate in the project in 2016. Accordingly, we don’t think the income for program participants in 2016 is likely to be sufficient, on its own, to justify the cost of the program.

However, we see the additional possibility of creating a larger long-term flow of Haitians who are able to use the H-2A program as sufficient to justify the grant. In our initial grant write up for the pilot project, we noted:

The project also seems to have considerable upside. If overstaying and abuse of H-2 visas are limited and Haiti continues to have access to H-2 visas, many more Haitians may be able to take advantage of the H-2 program in the future. Haiti sent roughly 500 people to the U.S. on H-2 visas in 2008 and 2009 (before it was removed from program eligibility), suggesting that that may be a realistic level to expect if legitimate employers begin using the program.3 500 is also roughly the mean annual number of H-2 users from countries in the Americas in 2012 that had at least one user (excluding Mexico, which is a substantial outlier).4 If 500 Haitians per year were able to use H-2 visas, their total income gains over a 10 year period would be around $50 million. While we think it is relatively unlikely that the project will result in such long-run gains, the benefits if it does appear substantial.

We see a few significant risks of continuing to fund this project:

We also continue to have reservations about using wages earned by Haitian H-2A visa holders as a measurement of the benefits of the project.6

This project is not supported by other funders, so we are fairly confident that the project would not continue if we were not making this grant.

We plan to speak with PTP roughly every 3 months to monitor progress on the project, with public conversation notes if the conversations warrant them.

We anticipate that we will decide whether to continue to support PTP’s work in the future largely on the basis of the number of people able to participate in the program in 2016 and the income that they earn:

We previously supported a related project aiming to allow Haitians access to the H-2A program. Our write-ups from that project:

Protect the People (PTP), which supported IOM on the initial project, expressed interest in continuing to attempt to facilitate Haitian access to the H-2A program at a substantially lower level of budgetary support. After some further investigation and discussion, we decided to recommend a grant. We negotiated the grant structure described above to ensure that PTP would have adequate funds to attempt the project but to limit our downside in case PTP faces barriers and is unable to reach the desired number of participants.