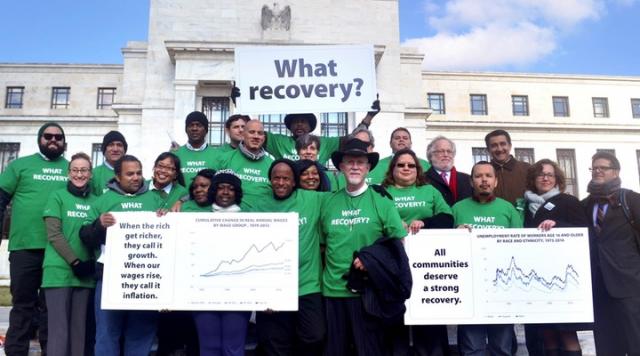 The Center for Popular Democracy is running a campaign (“Fed Up”) that aims to prevent premature tightening of monetary policy and encourage greater transparency and public engagement in the governance of the Federal Reserve. We previously contributed $100,000 to help the campaign get started.

While we remain uncertain about the campaign’s prospects for making an impact, it has demonstrated some preliminary success during the last few months. Our best guess is that the campaign is unlikely to have an impact on the Fed’s monetary policy, but that if it does, the benefits would be very large. Additionally, we see some value in the campaign’s call for greater transparency and public engagement in the selection of regional Federal Reserve Bank leadership, and in enabling CPD to experiment with an advocacy campaign in macroeconomic policy.

Based on these considerations, we decided to grant an additional $750,000 to the Center for Popular Democracy to support the Fed Up campaign. We anticipate that this grant will make up roughly 75% of the campaign’s overall funding for the year.

GiveWell staff member Alexander Berger has led our work on macroeconomic policy to date and was responsible for initial drafting of this page. Unlike much of our other output, the complexity of the debates in this area has made it impractical for other GiveWell staff to construct and check a complete trail of evidence and counterarguments for each claim in this review. (More on our process for forming and vetting the views contributing to this grant below.) As a result, while we stand behind the content of this page, the case for many of our beliefs has not been fully captured in what we’ve written up.

Fed Up is a campaign run by the Center for Popular Democracy in association with 19 other progressive national advocacy organizations, unions, think thanks, and regional community-based organizations.1 The campaign targets the Federal Reserve, and its stated goals are both substantive (to “create a strong and fair economy”) and procedural (to “create a more transparent and democratic Federal Reserve”).2

The campaign’s current projected budget for 2015 is around a million dollars, with spending breaking down roughly evenly between two components:3

This budget was informed by our decision to commit $750,000; an earlier draft was about 50% more ambitious in terms of spending.4 In addition to our commitment, the campaign has also raised $100,000 for its 2015 operations from another foundation, and anticipates some continued fundraising into 2015.5

The campaign envisions a number of different potential activities, with substantial variation based on decisions made by regional partner organizations. These activities largely break down into two categories: efforts to make clearer to Fed decision-makers the humanitarian stakes of their decisions, and efforts to credibly demonstrate that decisions by Fed policymakers will be subject to substantial public scrutiny.6 CPD asked us to keep the lists of specific campaign activities they’ve considered confidential on the grounds that publication might undermine their effectiveness. Future updates will look back on the specifics of CPD’s activities.

CPD was formed from a merger of two smaller organizations (one of which was also called CPD) at the beginning of 2014.7 Their current annual budget is roughly $8 million, and they have an affiliated 501(c)4 organization (Action for the Common Good) with an annual budget of about $2 million; together they have about 50 staff members.8

CPD is a progressive national advocacy group that works with local community groups across the country to promote their agenda.9 About half of their funding comes from the Ford, Open Society, and Wyss Foundations, and relatively little of it is unrestricted.10

We have not investigated CPD’s track record in depth. Program officers for other foundations that we asked about CPD in informal conversations reported generally positive impressions. One example of a campaign that CPD reports was successful was the “Campaign for a Fair Settlement,” undertaken prior to the merger, which pressured the Department of Justice to pursue a sizable settlement against banks that played a role in the financial crisis.11

Overall, our view about this grant is driven far more by our view of the campaign than by our assessment of CPD as an organization.

Before the August protests at Jackson Hole, CPD and 70 other progressive advocacy groups issued an open letter calling on the Fed to keep interest rates low until wages rise further, which prompted some initial media coverage.12 The protesters at Jackson Hole were covered widely in the media, including stories in the New York Times, Washington Post, Wall Street Journal, Associated Press, Reuters, and Bloomberg News, amongst others, and the group met with Kansas City Fed President Esther George for about two hours.13 Binyamin Applebaum, a New York Times economics reporter who was at the conference, said, “Their presence has been mentioned repeatedly by Fed officials and speakers, suggesting that it has made an impression.”14

Prior to their November meeting with Yellen, CPD and partner organizations issued open letters calling for greater transparency and community engagement in the selection process for the new presidents of the Federal Reserve Banks in Philadelphia and Dallas (whose current presidents had both announced plans to retire in 2015).15 The meeting, and CPD’s press conference prior to it, again received widespread coverage, leading to articles in the New York Times, Wall Street Journal, Washington Post, Bloomberg News, and Associated Press, amongst others.16 Soon after the initial New York Times report about the open letters, the Dallas Fed announced the specific retirement date for their president and the name of the search firm hired to seek his replacement, while the Philadelphia Fed also announced the name of their search firm and set up a public-facing email to receive input.17 In addition, at the national level the Fed has publicly disclosed more information about the selection process for regional bank presidents and announced the formation of a new “Community Advisory Council.”18 The group’s meeting with Yellen triggered a response from those who hold different views about the appropriate stance of monetary policy, with a Wall Street Journal editorial condemning the effort and a conservative group holding a press conference outside the Fed to counter the campaign’s message.19 Some reporters writing about the meeting interviewed former Federal Reserve officials, whose reactions we would classify as mixed.20

Overall, we see these early actions as supporting two premises of the campaign, and reducing the risks associated with failure on either of these assumptions:

However, we continue to see the question of whether the campaign might have any more substantive impact as an open one.

We wouldn’t necessarily endorse these priorities verbatim. We see the first one as the key substantive priority, and would summarize it as suggesting that Federal Reserve policy should be somewhat more dovish at the margin, i.e. erring on the side of keeping interest rates lower longer than it might currently plan to. We think that such a change would likely be very beneficial in humanitarian terms. However, monetary policy is extremely technical and subject to widespread disagreement, so we could fairly easily be wrong on the merits, a risk we elaborate on below.

Desirability of these goals on the merits

The central reason we believe that marginally more dovish Fed policy relative to the current baseline would carry net benefits is that, at roughly their current rates, we see unemployment as more costly in humanitarian terms than inflation. Our view comes partly from the impressions we’ve formed on following public debates on macroeconomic policy, and appears consistent with what we’ve found in a relatively cursory review of the literature:

While we believe that at current levels, a point of unemployment is more costly than a point of inflation, central banks cannot arbitrarily trade off unemployment and inflation: in the long run, efforts to permanently push unemployment too low would result in the unanchoring of inflation expectations and an inflationary spiral.33 However, inflation expectations are extremely well-anchored right now, with survey-based measures broadly stable at around the Fed’s 2% target and market measures of expectations generally below target.34 This suggests that the Fed should be able to keep rates low to further reduce unemployment while having only a small impact on inflation (and be pushing it in the desired direction—towards the 2% target).35 More generally, short run tradeoffs between unemployment and inflation are not believed to be 1:1. Conventional estimates tend to suggest that keeping unemployment a full point below the “non-accelerating inflation rate of unemployment” for a year would result in inflation 0.5 points higher for the indefinite future, with more recent research suggesting a somewhat lower tradeoff.36

In addition to this central argument from the welfare asymmetry of inflation and unemployment for keeping interest rates low when inflation is below target and expectations are well-anchored, we also see the risks from tightening too soon as outweighing the risks from tightening too late. The Fed’s recent experience struggling to provide sufficient monetary stimulus at the zero lower bound on nominal interest rates suggests that it is worth being disproportionately careful to avoid tightening too soon, in order to avoid a rapid return to the zero lower bound, and the attendant risk of not being able to stimulate adequately, in the future.37 Market participants currently estimate the probability of the Fed being back at the zero lower bound within two years of initially raising rates as roughly 20%.38 On the other hand, the Fed is capable of tightening more than currently planned in order to control inflation should it emerge later.

A relatively tight labor market seems unusually unlikely to prompt high inflation today because corporate profits are at a record high while the labor share of income is historically low, though if those factors are driven by secular trends, a tight labor market may cause inflation rather than shifting profits to wages.39

Finally, estimating the non-accelerating inflation rate of unemployment (NAIRU) is quite challenging and involves significant uncertainty.40 In the face of such uncertainty, testing the estimate to see whether unemployment below that level does in fact cause faster inflation could be prudent.41

Expert disagreement about these goals

In this section, we try to describe why some Fed officials with access to all of the information above, plus substantially more professional expertise, might nonetheless not agree with us that policy should err on the dovish side.

The below bullet points give our best guess at the main forces in play, with examples of people arguing that these are significant forces in the footnotes:

Feldstein 1997 considers a wider range of costs, including interactions with the tax code, and concludes that: “With the parameter values that seem most likely, the overall total effect of reducing inflation from 2% to zero, shown in the lower right corner of the table, is to reduce the annual deadweight loss by between 0.63 and 1.01% of GDP.” This model relies on a number of fairly strong assumptions about the behavioral responses to marginally higher inflation rates, which we think are relatively unlikely to occur in practice.