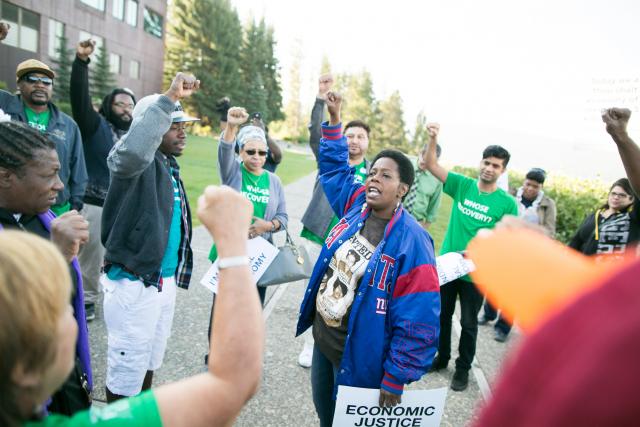 CPD staff reviewed this page prior to publication.

The Center for Popular Democracy (CPD) is running a campaign (“Fed Up”) that aims to encourage more accommodative monetary policies and greater transparency and public engagement in the governance of the Federal Reserve, and specifically in the selection of regional Federal Reserve Bank presidents and leaders. The Open Philanthropy Project has decided to renew our support for Fed Up with an additional $1 million in funding, plus up to $1 million to match whatever Fed Up raises from other funders this year. This is the third grant we’ve recommended to support CPD’s work on this campaign (see links in the sidebar for more information about our previous grants).

Our default expectation for this grant, as in previous years, is that it is relatively unlikely to have an impact on the Fed’s monetary policy, but that if it does, the benefits would likely be very large. We believe the call for greater transparency and public engagement in the selection of regional Federal Reserve bank leadership is more unambiguously positive and also more likely to succeed, though we do not have much sense of the humanitarian impact of such a change.

The campaign had a strong 2015 in our view (more details below), which increases our estimate of how likely it is that it will have the effects it is aiming for. As ever, we acknowledge that this is an unusually complex policy area, and we could be mistaken in our views.

April 2017 update: In total, we ended up recommending $429,000 in matching funding. The “grant amount” above has been updated to reflect this.

CPD is a progressive national advocacy group that works with local community groups across the country to promote its agenda.1

Fed Up is a campaign run by CPD in association with 24 other progressive national advocacy organizations, unions, think tanks, and regional community-based organizations.2 The campaign targets the Federal Reserve, and its stated goals are both substantive (to “create a strong and fair economy”) and procedural (to “create a more transparent and democratic Federal Reserve”).3

More information about CPD and Fed Up is available here and more about our work on macroeconomic policy can be found here.

Overall, the progress made by Fed Up in the past year exceeded our expectations. The campaign attracted substantial media attention and obtained access to some influential policymakers. It is too soon to tell if the campaign will impact monetary policy, but we now believe some basic risks (such as being unable to attract the attention of the Fed at all) have been much reduced. Fed Up Director Ady Barkan’s leadership contributes to our confidence in the campaign.

We do not know if the campaign has had a humanitarian impact, and believe it is likely that we will not have much information on this point until the next recession.

Fed Up was covered relatively extensively in the media over the past year. A collection of examples of Fed Up press coverage from 2015 and 2016 can be found in Fed Up 2015-2016 Press Clippings. Below are some examples of coverage (positive and negative) that the campaign received:

Overall, we are impressed with the press coverage Fed Up has received. The campaign was featured in much of the news about the Jackson Hole Symposium. Since then, Fed Up has continued to be featured in other stories about the Fed, which we believe is a sign of the campaign’s ability to attract ongoing media attention.

Fed Up was able to interact with influential policymakers more than we expected.

While we’ve been positively surprised by the campaign’s access to date, we doubt that it has yet been able to build enduring relationships or cause meaningful shifts in policymakers’ views.

Our impression is that Fed Up was successful in achieving its goals at the 2015 Jackson Hole Economic Policy Symposium. The campaign received substantial press coverage, as discussed above, and Fed Up representatives were able to interact with some influential policymakers. We believe the campaign’s presence was felt by policymakers and helped demonstrate that the public is interested in actions taken by the Fed.

When Yellen was asked about the protesters at the press conference after the September FOMC meeting, her response was ambiguous, as we would expect.22

The White House’s chief economic advisor, Jason Furman, spoke at the Fed Up event for approximately 45 minutes, discussing pro-growth monetary policy and concerns about Federal Reserve governance, and inviting Fed Up representatives to visit with him in Washington, DC.

We believe that Fed Up did not greatly influence the outcomes of the Dallas, Philadelphia, and Minneapolis Fed president selection processes that took place in 2015. Our impression is that the campaign had not yet built up sufficient power and influence to substantially affect the process.

The campaign continues to advance the same broad substantive23 and procedural24 goals as it has over the past year, including calling for looser monetary policy and more transparency from the Fed and the Regional Banks.

The main changes with respect to these goals this year are that:

The initial 2016 budget given to us by Fed Up was for $4 million, but we also requested budgets for $2 million and $3 million. Each of these budgets would be a substantial increase from 2015.25

We expect Fed Up would spend a $3 million budget approximately as follows:

The campaign’s current funders include several large progressive funders, and CPD also receives some general support from a number of others. After discussion with CPD, we don’t believe the support from these funders is likely to dramatically increase in the near future.

We see the case for this grant as fairly similar to the rationale we laid out for making the previous grant. This time around, we’d summarize the case as follows:

We consider this an unusually risky grant. Experts disagree about this subject, and it is possible that this grant could backfire by provoking opponents of more accommodative policies to become better-organized. Overall, the risks described last year29 continue to apply, though the risk of straightforward programmatic ineffectiveness seems to have been significantly reduced by the successes of 2015. We find it plausible that in the future, Fed Up may continue to press the Fed to keep interest rates low at a point where we believe the ideal rate is higher than what Fed Up would advocate for. We feel this risk is acceptable.

We expect to have a conversation with campaign staff roughly every 3 months for the duration of the grant, with public notes if the conversation warrants it.

When the next recession occurs, we plan to attempt a more holistic and detailed evaluation of the grant’s performance. We may check the transcripts of 2016 FOMC meetings after they are released in 2022 to see whether any of the FOMC members discuss meetings with workers that inform their perspectives on policy.

We monitored the campaign throughout 2015 and had conversations with Ady Barkan of CPD about the campaign’s plans and progress. We followed the media surrounding Fed Up and its interactions with policymakers. Karl Smith, who worked with us in 2015 as a consultant, attended the Jackson Hole Symposium and reviewed some of the campaign’s 2015 activities with us.

“The Center for Popular Democracy is a high-impact national organization that promotes equity, opportunity, and a dynamic democracy in partnership with innovative base-building organizations, organizing networks and alliances, and progressive unions across the country. CPD builds the strength and capacity of democratic organizations to envision and advance a pro-worker, pro-immigrant, racial and economic justice agenda.
Collectively, our staff of more than 40 [edit: as of March 2016, CPD’s staff is 62 people] brings decades of experience to bear, merging technical and legal expertise with deep organizing experience to support our partners in winning, sustaining, expanding and replicating victories across the country. CPD not only helps partners win organizing campaigns and further innovative policy agendas, but we also support them to build strong organizational infrastructure and political muscle.
The Center for Popular Democracy will be joined in this campaign by core partners interested in Federal Reserve bank cities across the country, each of which have broad memberships bases, deep political relationships, and alliances with labor and community groups across their cities.”