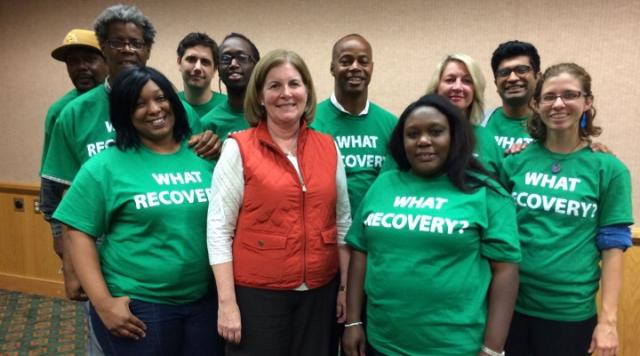 The Center for Popular Democracy (CPD), a progressive organizing group, is planning to launch a campaign to educate the public about monetary policy and encourage the Federal Reserve to give more attention to the full employment portion of its mandate.1 CPD approached us for support for the campaign after hearing about our interest in potentially funding advocacy in this space.

A version of CPD’s proposal that we received permission to share publicly is here. This version is significantly redacted and somewhat altered relative to the private version initially shared with us; in particular, it has a somewhat less overtly progressive tone. The budget for the campaign is variable, depending on CPD’s ability to attract funding, but is on the order of $1 million for the 12-month campaign.2

CPD’s stated “primary goals” for the campaign are to:

We essentially interpret the first two goals as trying to shift the center of the Federal Open Market Committee in a slightly more “dovish” direction (i.e. placing more weight on unemployment/slack as opposed to inflation, in favor of accommodative monetary policy), towards the position of Fed Chair Janet Yellen, who we would guess is already fairly close to, but slightly more dovish than, the center of opinion of FOMC members.4 We do not have terribly high confidence that shifting the FOMC slightly in Yellen’s direction would be beneficial for policy, but we think it is more likely than not because:

All of that said, because the Federal Reserve is a highly independent and not-particularly-publicly-accountable institution, we see the prospect that the campaign has a substantial impact on the conduct of monetary policy as relatively unlikely. We do not see any chance of moving the policy outside the range currently contemplated by FOMC members (and we regard that as a positive point). We anticipate devoting considerably more effort in the coming months to trying to understand the distribution of opinion on the FOMC and trying to determine with more confidence whether moving the center of FOMC opinion closer to Yellen would be likely to lead to better macroeconomic policy.

We find the campaign’s third goal more uncontroversially desirable. Regional Federal Reserve Bank presidents, who attend FOMC meetings and vote on a rotating basis, are selected by their boards of directors.11 The boards are made up of elected representatives of local banks and some representatives appointed by the Federal Reserve Board, but the selection process does not appear particularly transparent or accountable to the public.12 While we don’t see a huge amount of direct utilitarian consequences for this consideration, there seems to be a strong procedural presumption in favor of a more credible, transparent selection process for regional Federal Reserve Bank board members and, in turn, presidents.

In addition to our tentative view that the campaign’s goals are worthwhile ones, we see this opportunity as testing an important premise of the case for macroeconomic policy as a potential focus area. Many people we have spoken with have pointed to the lack of advocacy around the FOMC from those concerned about unemployment, and we have taken that argument as evidence that macroeconomic policy may be neglected as a philanthropic cause relative to its importance. By providing early stage funding that allows the campaign to get started more quickly and that allows us greater access to follow the campaign as it unfolds, we hope to test the hypothesis that there are good funding opportunities in advocacy around macroeconomic policy that are currently going unfunded.

While we would guess that the basic case we’ve articulated is reasonable, we see a number of reasons for concern around this opportunity: